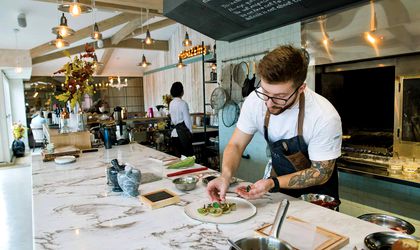 I avoided Maize for a long time, as they had copied the name from Gordon Ramsay’s flagship restaurant in London. That bothered me as it was a cheap move. If they thought that Ramsay’s magic dust would rub off on them, they were mistaken, but nonetheless Maize is good.

I had to overcome my misgivings when I read that they were lauded as the best restaurant in Romania by a French tourist food guide. So here I am to check out the veracity of that shoddy guide.

Maize is bright and breezy with an open kitchen (always a good thing) occupying 40 percent of the floor space. But on entering, my ears were assaulted by a noise Americans call ‘hotel elevator muzak’. There is no discernable song, just a grinding yet soft musical ‘thing’ which is meant to relax you, but its relentless repetition drove me to the edge of my sanity.

I was informed that the theme of the House was a ‘bio’ restaurant. The politically correct bio movement is based upon a well-intentioned misconception that bio produce is healthy. Rubbish! It has no additional nutritional value than normal produce, has less flavor and costs far more than normal produce.

Bio is a movement embraced by hippies and food fascists alike, and in its purist form, all vegetables are grown in a fertilizer soup of raw animal and human sewage. This is recycling at its literal best, but the notion repels me.

So let’s eat. The online menu is a poetic delight to read with a mouth-watering description of each dish, which was inexplicably missing from the menu on my table. I was utterly seduced by the online description of the House trout. But when I ordered it at my table I was told that it was off, as it was not “trout season”. WHAT!!! There is no trout season whatsoever.

Maybe the petulant bio trout, in his pure bio water, had a bad hair or scale day, threw a moody huff and refused to get out of the pond. The oh-so sensitive bio fisherman probably respected the fish’s PC ‘animal rights’ and left him alone. As for me, I would stand no such s**t. I would have gaffed him with a giant hook, pulled the bugger out of his bio pond and beaten his bio head till death, then thrown him into the cooking pot. That is reality. Back to the menu. I had the bread starter with three dips. It was superb, with three hot freshly baked breads, together with a further three dips of fish roe, kale and mixed meat of deer, boar and beef. At RON 33 for the dish plus more for the wine, it would be worth quitting at this point as good value. But no, I had to go on for more.

I felt healthy, so I opted for a salad, about which I will quote from the online menu: ‘beetroot baked in madison coffee and semi dehydrated in its own juice with shaved horseradish, burrata and smoked silver carp, green herbs from the garden and lovage oil’. Oh what pomposity! I could barely discern the sum of the aforementioned parts, and ate a green bio salad with sliced beetroot at a whopping RON 45.

So again, off to the menu, at which point I had to pause for thought. There was something missing from it; in fact almost everything was missing from it. There was no pasta, lamb, tomato, onion, asparagus, eggplant, courgette, prawn, octopus, lobster, chili… oh I could go on forever, but clearly all those ‘ghost’ ingredients were not bio enough for the kitchen.

It was both a wonder and a compliment to the chef that he could design a menu at all considering the ‘ghost’ ingredients we expect as a comfort staple were missing. So off I went to a safe chicken with ‘elements in a fermented cabbage sauce’. It was a simple delight, with a ‘two way’ cooked potato, chicken breast and offal ‘elements’ of liver and two hearts. A Romanian chicken with two hearts? Bearing in mind that chickens are all female, I have yet to find a gorgeous human Romanian female with one heart, let alone two!

Before I left, I had to check out the kitchen, which was an oasis of calm. Bravo House. My waiter was well informed about every dish, so bravo again. But despite the media hype about Maize, there is no way they can be number one in the land. They have to compete with La Cantine and The Artist, which are both on a different level, with a different concept and different menus. The only winner is you, the customer.