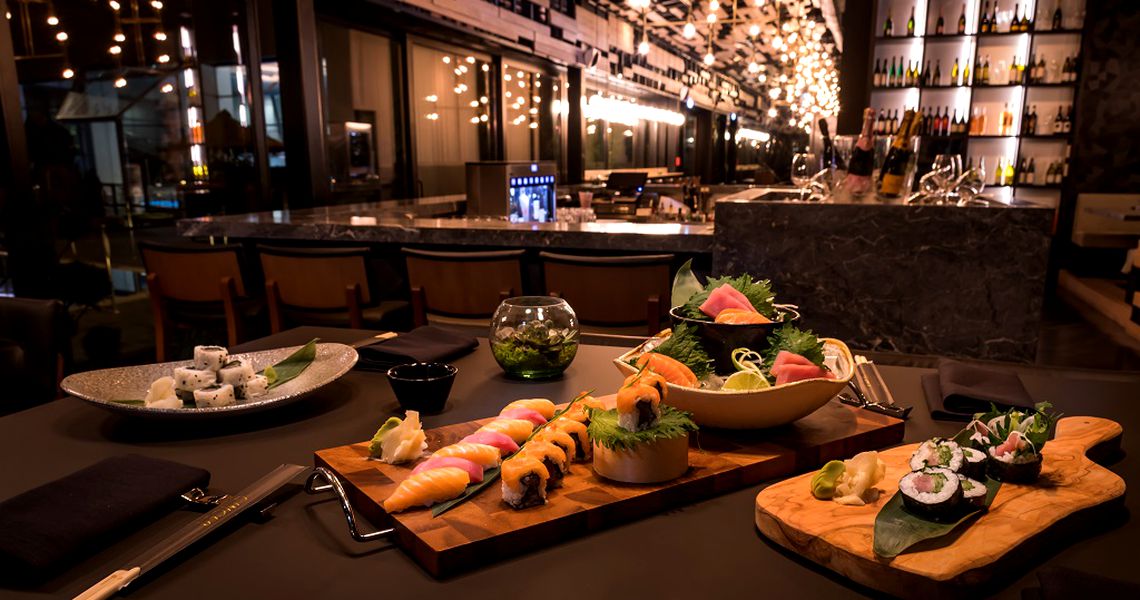 If you like dining in hotels – and why wouldn’t you, since they offer you huge space and a distinct atmosphere – you cannot ignore the Radisson Blu as it has more food outlets than any other hotel in town. So let’s look them over.

First, there is Sharkia at the rear of the hotel, with an entrance in Luterana Street, within Park Inn by Radisson Bucharest Hotel & Residence. For me, this is the best restaurant. It is reasonably priced and is based loosely on Middle Eastern cuisine.

We started with a Lebanese “fattoush” salad, with cucumber, lettuce, onions, mint, cheese and pomegranate. It was classically correct, fresh and perfect. But we could not leave it there, so we had a selection of starters in the spirit of Middle East  “mezze”.

So away to a three-way selection of hummus: plain, with lamb and pine seeds or our choice, with chicken, pumpkin seeds and harissa. Then we followed up with a “kofta” (minced lamb and beef) on a cinnamon stick. The stick came in handy as I used it again, and again. All of the above cost an average of 30 lei. They have a tabun oven, a clay oven emanating, used mainly to cook flat bread. The technique is used worldwide. 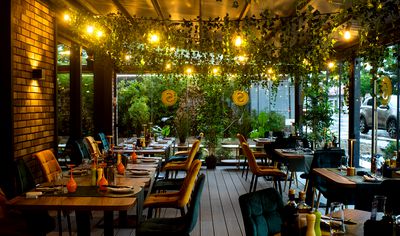 Off to their fine-dining restaurant Prime Steaks & Seafood. As its name say, it is themed around steak and seafood.

Steak is only as good as its producer, and that means searching the “steak world” for the best suppliers. They did a good job. From Ireland there was tenderloin and ribeye. Argentina gave them sirloin and Uruguay fillet. Their seafood offerings were well planned. We ordered “scallops in a truffle sauce”. I thought that combo would be a disaster as I had anticipated the truffles would overwhelm the delicate flavor of the scallops. But I was wrong – the dish worked perfectly. Now let’s look at the Ginger Sushi Bar & Lounge. If you like sushi, you will love this. It has every variation available, and of equal importance, it serves hot Saki. This delicious Japanese rice wine is the perfect accompaniment for sushi.

And now for their Dacia Felix restaurant. We had Sunday Brunch there, a buffet selection of varieties. Almost half of it was fresh raw vegetables – a heaven for vegans, but not for me, as I am a blood sucking carnivore. So after gorging myself on oysters I craved meat, and got it. I sliced myself a generous helping of foie gras together with a fig compote and a butter toasted brioche.

They have a carving station, from pork, to beef, or turkey. I grabbed a handful of excellent lamb chops on the bone, which I devoured with my bare hands. There was a sushi station, showcasing the products of their Ginger restaurant, and a lovely pizza from their Italian Caffe Citta restaurant.

I also saw a “beef tartar” – raw seasoned chopped beef and also a “salmon tartar”. This dish is for serious carnivores like me. It was perfect. Sunday is considered “kids’ day” and you would be well advised to take them here for their endless selection of gooey, mushy, chocolatey desserts. They will love it.

Then there is Caffe Citta, their Italian restaurant, which tries really hard to bring regional and seasonal food to you. They want to be different from the thousands of so-called “trattorias” in the land, all serving the same food from identical menus. But being Italian they have to have pasta, and they cover every base with a selection of pastas, namely: spaghetti, penne, tagliatelle, pappardelle, and tortellini. They are all pastas, but in a variation of shapes.

We had spaghetti carbonara and the House followed the classical recipe of egg, bacon and parmesan. It could not get better, so we resigned our search confident in the fact that they know their stuff. Oh, they also have a selection of ten different thin crust pizzas, but we will not list them as we are sure you will know them already.

If you are a morning person, you should definitely take your breakfast there, as they recently introduced a new concept “A-la-carte Italian breakfast” and try their salmon or veggie frittatas.