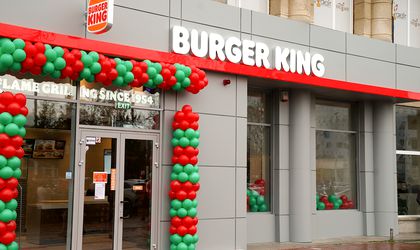 After inaugurating six new restaurants in the first year on the Romanian market, AmRest, one of the largest European restaurant and food service platforms, opens a new Burger King restaurant in the center of Bucharest. It is located on Calea Victoriei, no. 155 and will be open, according to the legislation in force, both for take-away and to honor the orders that come through the delivery platforms.

The seventh newly opened restaurant in Bucharest appears just a few months after the inauguration of the Burger King restaurant in South Square (tr. Piața Sudului), this being part of the company’s long-term strategy in Romania.

The new restaurant is located in Victoriei Square, a promenade place for Bucharest residents and will have a team of 30 grill kings. In addition to the already well-known Burger King products, in the new location, Burger King fans will be able to find the new products recently introduced in the menu – Plant Based Whopper & Plant Based Nuggets. As always, the company took all the safety and hygiene measures in preparing all orders: from containers with disinfectant in all key points of the restaurant, to equipping employees with masks and gloves.

“Although last year was a challenging one for everyone, we adapted quickly and made every effort to continue to provide fast and quality services, constantly working on expansion plans in the region, as promised. Thus, we managed the performance to open four new restaurants in a state of emergency, less than a year after our appearance on the Romanian market, reaching all our proposed objectives. In 2021 we continue to grow, and today we are happy to announce that we are opening the seventh restaurant in Bucharest, right in the centre of the Capital. Romania is an important market for us, where we want to invest and for this year we are preparing as always special offers for Burger King fans and we will also carry out our strategic plans”, said Daniel Ryska, AmRest Regional Director CE & SEE.

Burger King opened six new restaurants in the first year since its appearance on the Romanian market. In addition, the company integrated in a record time, during the pandemic, the food delivery service through partnerships with delivery applications and developed the already existing take away and pick-up services.