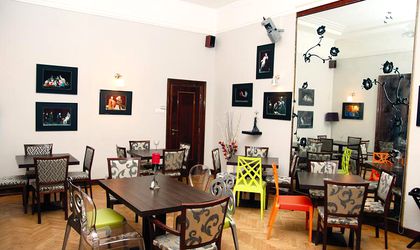 My introduction to this place was through some Spanish friends of mine who informed me that last week they graced the club, only to be served by a sour-faced middle-aged waitress, who threw the menu at them and disappeared, the manager grumbled something incoherent at them and disappeared and the waiters did not appear at all! So, let’s compare my experience there.

But first, let me explain exactly what this place is all about. It is a restaurant with a cabaret. This may be actors performing a set or two in the middle of the dining area, or simply a chap pounding away on the ivories of a rather fine piano. Forget the ‘club’ bit – at the end of the day, it is a restaurant and its location is so good it must be the envy of the town.

There are two good things I can say about the House, namely: the prices are very fair and the place itself is delightfully decorated. It is pure, pristine and polished 1950s in a pleasant way. It is somewhat reminiscent of an old three-star cruise-liner. But those are the only good things I can say, because they deserve a good trashing, and here it comes!

It was Blondie’s anniversary of her parting with her ex, so I celebrated by ordering from the wine list the world’s finest champagne, Dom Perignon, which was very reasonably priced. And the waiter’s answer? Yes, you have guessed it: “We don’t have any, sir.”

So Blondie ordered from the menu, a simple Grenadine and fresh orange cocktail.

“I am sorry but we don’t have any Grenadine or fresh orange in stock.”

So she asked if she could have a Coke.

I was getting thirsty listening to this negative exchange, so I felt a beer break coming on and ordered a Pilsner Urquel from the menu.

So rather than pursue a predictable comedy of rejections, I asked him what other beers listed on the menu were likewise out of stock.

“We also have no Budweiser or Corona,“ he said, both of which were my next choices!

So away I went to a glass of their House red wine. Oh no, it was ghastly. Vile beyond description. I spat it out. I asked the waiter to show me the bottle and he confirmed that which I had already deduced: it was so-called ‘country wine’. This is the undrinkable home made hooch you buy in a plastic two-liter cola bottle. How dare they sell this garbage in a restaurant!

By now I wanted to order food, but the waiter had disappeared. I left my table to search for him. There was no excuse for his disappearance, as the only other diners were two large ladies wearing multiple woolen cardigans over each other and sporting glasses supported by a rope around their necks. And there were four other uninteresting male diners, all of whom were uniformly attired in anoraks, or some grubby top with a hood. Yes, my dear friends, these are ‘arty’ people and Uniter attracts them. They are not my kind of folk, and I humbly suggest that if you are elegant or a fashionista, you would be uncomfortable being in the company of these ageing hippies.

So where the hell was my waiter? Eventually I found him doing nothing and ordered a simple starter of ‘bruschetta with butter anchovy and capers’. I expected a pureed relish of anchovy, butter, olive oil and capers. But no. It was one piece of supermarket sliced bread, toasted with two anchovies shaved into thin slices, being kept company by five lonely capers.

So being hungry I wanted to order more. In a restaurant which only had two other tables of ageing degenerates, my waiter was hardly overworked. But I had to search for him again. In fact, I had to leave my table to attract his attention an astonishing FIVE TIMES.

So we ordered from their selection of ‘French Pancakes’ a pancake with spinach and bacon, and a further one with chicken and Camembert cheese, but which I anticipated would be filled with Romanian yellow cheese. Both were offered with a topping of sour cream. Yuk! I told the waiter to kill the sour cream and yellow cheese. Naturally, I was ignored on the yellow cheese bit, so I could not eat this dubious Gallic delight. And the kitchen screwed up the pancake. We all know how to make a pancake, but the Uniter version was something else. It resembled a pancake because it was flat and round, but it was dark yellow and swimming in grease. Another failure.

Still hungry and unable to eat anything here, I chose a simple prawn spaghetti. But I told the waiter I wanted lashings of white wine and tons of garlic in my pasta. Simple instructions, but again they got it all wrong. There was no wine in it whatsoever and the six prawns I counted were destroyed by the kitchen burning the garlic which would render any dish inedible.

Could the House get any dish right? Well, to be fair to them my steak in green pepper sauce was both generous in size and perfectly tender. But it lacked flavor, as did the sauce. In the same spirit, Blondie’s pork fillet with mushroom sauce revealed a perfectly cooked pork, but the sauce was bland and flavorless.

We were tempted to order more, but when I read their version of ‘beef Stroganov’ as being beef steak, mushrooms and ham, I froze in horror. It should be beef sliced julienne, fried in butter and mixed peppercorns, with mushrooms and hot mustard, reduced in white wine , thickened with fresh cream and flambéed with Cognac. To put it simply, the House got it all wrong and the menu is far too ambitious for the kitchen.

I wondered how a place like this, which offers so little, could possibly survive the frenetic financial cut and thrust of the competitive restaurant market here in town. Well, the cataracts of curiosity fell from my eyes when I was told that this aberration was owned and financed by the Ministry of ‘Culture’. This may or may not be true. But if it is so, it will be languishing in its prime location for ever, and being accountable for commercial profitability to nobody. How sad.