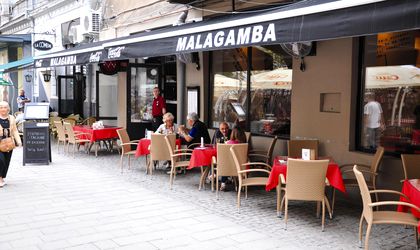 Ifind myself back in Lipscani where every night 10,000 people flock into this tiny area for fun and revelry. There are good and bad places to go to, and Malagamba is good. But it is not perfect as you will see. So let’s look at the bad first, because it can easily be fixed.

To put it simply, I love young Bucharest waiters. At last, they have realized that they have to work for their tip, so most are a delight. What they lack in food knowledge, they make up with charm, humor and enthusiasm. But not at Malagamba! A miserable face came to us and in complete silence, and with no eye contact, he slapped our menus on the table and walked away.

A different face came to take our order. He was so dour and indifferent to us that I suspected somebody had just texted him to say his dog had died. The staff must have had a lot of dead dogs that day because they all ignored the customers. When we asked another face for our bill (he wasn’t the face that served us), he couldn’t be bothered to pass our request on, so we waited in vain for 20 minutes until I was forced to hunt around for my designated miserable face. None of the faces gave a toss. The House should fire the whole goddamn lot of them!

A good waiter can make a bad meal just about forgivable. A bad waiter will always spoil a good meal. And let me assure you, our meal was good but spoiled for that reason!

So off to the menu which boasts that they offer “recession prices” (it’s true), but what happens after the recession? For RON 19 I had the most generous imported Italian salami Misti I have seen in this town for years. I won’t list it, just gorge it yourself.

We followed with a ‘fettuccine pasta with lime, chicken and Tequila’. It sounds as sexy as hell, but it didn’t work with chicken. But everything else worked. Away to a ‘Mambo’, lots of tiny breaded chicken twists with cherry tomatoes, a House spicy side dip, and a huge mountain of fabulous (and expensive to buy) ruccola. I simply cannot see how the House could make a profit on this treat at RON 18.

But better still was their grilled (baby) monkfish at a bargain price of RON 23. The House is one of three chophouses in the entire nation that I know of which sells monkfish. In case you haven’t tried it you should because whilst this nation’s nouveau riche, gold bangled, bottom feeding, social trash dine for the first time in their lives on lobster at Sunday brunches, real old money, sophisticated European cognoscenti choose monkfish over lobster, albeit at the same price.

So if you suffer from the misfortune to have a neighbor who is either a rich footballing lout or a property gangster living in a huge, vulgar, ice cream colored palace in Ianca Nicolae… do not tell them about monkfish or they will buy it all up and spoil the market for us.

We passed on a mysterious House jobbie of ‘chicken and potato moussaka’ which I am confident would be fine provided the kitchen used lashings of white wine. Likewise, we missed their Gorgonzola chicken, their grilled squid and ruccola and their tempting ‘bream

with sundries, artichoke, capers, tomatoes, garlic and lemon butter.’ But we are going back for it. This fish will not wriggle off my table hook. Especially at a mere RON 23!

We had four excellent lamb chops as a side for RON 26, but I made a mistake for which I blame myself rather than the House. I should have specified that I wanted them ‘pink’ rather than Romanian style well cooked. Next time I will ask (and you should try this) to get them pink AND brought to the table wrapped in aluminum tinfoil, thereby resting them and retaining their juices. This is a good House and I assume the chef will understand.

Their chef did a good and honest job with their seafood pasta which (unlike most expensive and even quality Italian chophouses in town) was not thickened out with fraudulent, so-called crabsticks which contain no crab, and are made from the scrapings off a seafood factory gutting floor.

As I am a former chef, my only words to House chefs Alex and Nicolae are “bravo chefs, but please use much more passata, garlic and white wine in your dishes”.

There are many criteria by which one can praise a restaurant, such as: décor, food quality, ambiance, ethnic authenticity… and so on. But if I isolate one criterion – namely value for money – Malagamba is the best chophouse on the ‘strip’. It is simply head and shoulders above anybody else. Oh, and the food is good too.

But they may not have it all their own way for too long, for rumor has it that four new chophouses will open in Lipscani before the end of the season.

But they should not worry, because rumors are like the album of the same name by Fleetwood Mac. Both should be ignored!