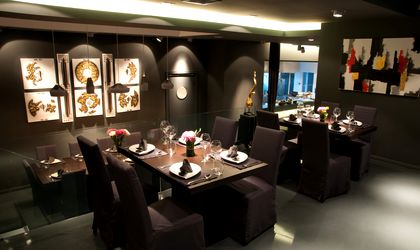 Kunnai means “Modern Madame”, I’m told by Anne Ampawan, the owner of this recently opened Thai restaurant in the Domenii Park area. The concept combines contemporary dynamism with classic tradition and is the point of departure for a menu that she and Chef Songrit have carefully designed to reflect contemporary Thai cuisine. The choice of spices, herbs, ingredients and cooking method was determined by one idea: the specifics of Thai cuisine in relation to other Asian gastronomy, such as Indian, Chinese and Japanese.

This is why kaffir lime leaves, lemongrass, coconut milk and jasmine or sticky rice are ingredients that one will find in almost every dish on the menu.

The same idea of uniqueness was behind the restaurant’s elegantly minimalist yet warm design. “We were asking what the defining color was for Thailand, and the answer came right away: gold!” says Ampawan. She sought the creative support of a renowned Thai painter and artist called Aran Chankasem and the team of StudioQube Bangkok. By the way, once you have stepped inside the restaurant, you can admire Thai calligraphy reflected in the full name of the city of Bangkok written in golden letters on the right-hand wall.

The two-floor space lets you be right the middle of things if you choose a table next to the open kitchen, which, unlike in other restaurants that have one, is perfectly integrated into the minimalist décor. If you choose a table on the first level, which is actually designed like a large retreat balcony, then you step into a world of Thai beauty brought about by the carefully chosen pieces of art from sculptures to wall decorations, which brighten the interior.

Once you have assimilated the space itself, the feast of tastes can begin! The art resides in combing opposing flavors directly in the mouth, says Ampawan.

We started with Por Pia Kunnai, Authentic Vegetarian Spring Rolls (RON 25), a combination of cabbage, leek, onion, garlic, shitake mushrooms and celery that felt like one new taste. The Thod Mun Goong Lang Wang, Royal Shrimp Cakes (RON 30), in which the shrimps, fish, pork and coriander were perfectly balanced, made me think about summer colors and sunlight!

My favorite was the Tom Kha Gai Khun Ying, Chicken in Galangal and Coconut Milk Soup (RON 25), where small pieces of chicken floated in a senses-delighting combination of galangal, lemongrass, kaffir lime leaves, mushrooms, coconut milk, chili, tamarind and coriander. Next came a specialty of Thai cuisine: Gaeng Massaman Nue/Gai, Typical Massaman Curry with Chicken (RON 30) which showcases the massaman curry in a combination with chicken, potatoes, cherry tomatoes, cardamom and peanuts. Definitely not to be missed!

Wonderful news for dessert lovers and dangerous temptation for those of you on  diet: all the sweet dishes on the menu are an irresistible paradise on earth!

However, I can draft a shortlist of ‘must tries’: the unexpected Kanom Morgaeng, Yellow Bean Custard, and the fantastic Kanom Gluay, Banana Cake! Last but not  least: this top Bucharest restaurant has affordable prices and a wonderful location opposite a children’s park in the Domenii area.