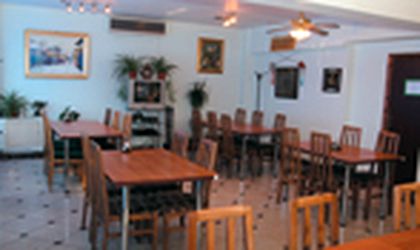 Korea House gives you an authentic version of genuine home Korean cooking which has to be taken seriously. It is good. The basic cultural rules which distinguish it from the neighbouring Asian countries are the use of steel chopsticks (‘jeatgarak') together with a long steel spoon (“sutgarak').
Here are the rules. Etiquette dictates that you do must wait for the oldest person to start the meal (Christ, I nearly starved to death waiting with a table of four pensioners) and do not push the rice bowl into your face as in Chinese or Japanese chow; no, you must leave it on the table and use your spoon. Thereafter you use the chopsticks for the ‘banchan.' This takes some explaining.
Banchan is an essential element of Korean cuisine. Basically it is numerous variations of side dishes which are served gratis by the House (oh yeah – they are loaded into the bill with the cost of your mains) but culture dictates that you can order as many ‘banchan' all through your meal at no additional cost.
And the ‘banchan'? Yes they were ethnically correct (we had four dishes of highly spiced vegetables, although in Korea I get ten dishes) but nonetheless they added an authentic element to the meal.
However, there is one rule regarding ‘banchan' and it is this: ‘Kimchi' must be served and this is a concoction of fermented radish and cucumber. On its own it is quite ghastly, but the clever House has made it palatable by making it into a pizza. Yes, literally a pizza and it was absolutely gorgeous. But different!
So off we go to starters and mains. The restaurant is a bit of a dump, situated north of the Crowne Plaza. The House's expenditure is minimal and my only issue is why they charge max prices (between RON 30 and 45) per dish when it is obvious that they have not spent a maximum investment on their premises!
But I had no complaints about the food whatsoever. And as for the service, they have an electronic button on the table in order for you to call your waiter to your table. Kitsch perhaps, but a nice touch!
So off we went to a selection of ‘potato and vegetable kimchi,' which was utterly loveable.
We tried ‘mandu' which were fried (I would have preferred Chinese style steamed) veggie spring rolls which were perfect. But the mains were memorable.
They were huge. Our ‘chicken in sweet and sour sauce' was nothing like the Chinese version. There was no pineapple and overtly strong vinegar and cornflour sauce – instead it was a crispy, dry batter (snitzel) laced with hot chillis. I loved it.
I also loved the beef variety of the aforementioned, together with their ‘calamari and vegetables' in a spiced up sauce with vegetables.
There was liberal use of ‘red curry paste' which was house-made and if you do not know what that is I suggest you get a Thai cook book because the Koreans are realistic enough to blend Thai, Japanese and Chinese cuisines into their national dishes.
According to local custom, rice is considered to be a dish in its own right (as in Thai cuisine) and it was perfectly and correctly served as short-grain and steamed rather than boiled.
Korean cuisine is based upon a judicious use of garlic and chillis and afficionados of such will not be disappointed.
I really loved my meal and to get there simply drive past the Crowne Plaza to find it on the right hand side of the road after a few minutes. I think it is expensive for what it offers but having said that it is the most authentic Asian chophouse in the land.