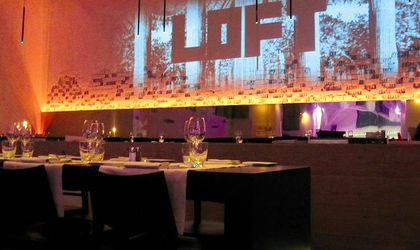 The world marvels at the total lack of a sense of humor which apparently besets the German nation. But this pales into insignificance when you compare the Germans’ (self deprecating) lack of humor with that of the Romanians.

Romanian humor is so very odd that it cannot be appreciated by any other nation. If you need proof, just look at today’s choice of restaurant – The Loft (mansard) which is not a loft, but rather a ground floor restaurant. Oh yeah! So very un-funny.

That stupid name may inspire a smile, but if it is intended as a fall-down, hysterical joke, it fails! It also fails on other points, but not on the quality of its food! So let’s go and eat there.

Situated in a new red brick office block housing both companies and Mega Image, you would guess (and be correct) that the decor would be state of the art. Absolutely!

You enter a cavern of a room, all open plan. Again and again, I reinforce the point I made many years ago in this column, namely that villa conversions with lots of boxy rooms are all destined for bankruptcy. Diners want the buzz of others’ conversation together with seeing their friends, accompanied by their spouses or not. So vast, open space restaurants are the ‘rule’ around the world… and The Loft qualifies.

It is a square shaped room with a huge ceiling, boasting a modern, crazy, shapeless mass which looks like a concrete sculpture (but is not) and I loved it. Being a square, I also loved the waiting area, which is inside the square of the dining area.

The furniture was a let down with cheap dark brown tables and matching plastic chairs. But you miss this point in the overall design experience, which is relaxing and soothing. OK, let’s go and eat!

The menu arrived, and I almost fell off my seat laughing, for it was illuminated. Yes, that means it glowed by being powered with a battery, and it emulated a computer tablet. OK, it was a ‘first’ for unsophisticated Bucharest, and it made an impression.

But the real impression was inside the menu. They have a French chef, and if he can pull off his menu it will make him the top French chef in the land. Each dish on the menu had a silly name attached. Vegetable soup was described as “Vegan Zombies” and French Onion Soup was “Mother of Tears”. Oh God, this is so embarrassing.

So we started with an endive salad entitled “Lawrence of Arabia”. Oh, enough is enough with this silliness. Let’s judge the food on its own merits.

We called our waiter. He was so miserable that I thought that somebody had just told him that his dog had died. Well, they must have had a lot of dogs die, because everybody, and I shall repeat that, every waiter was wearing a miserable face like a wet fish.

So I asked my wet fish if the foie gras starter was a terrine or a pan fry. He didn’t know. He had to refer the question to his colleague, who was too busy playing with his hi-tech hand-held computer toy to bother to answer me.

So Blondie ordered the above endive salad which was superb. It is difficult to fall in love with a salad, but the House did a good job by adding fresh dates as a perfect balance to the bitterness of the andives. With starters coming in at around RON 35-59, they were not over priced. We passed on a fascinating ‘foie gras terrine wrapped in a chocolate coat’. This dish alone warned me that the House had a serious chef and as for his other creations on starters, I will leave it to you to explore. It is well worth it.

Chef excelled himself on the mains. Blondie didn’t want to do a ‘double’ on an 800 gram Wagu beef at RON 380. If that sounds expensive, believe me it is not. Wagu is the Kiwi version of Japanese Kobi beef which is the most superb and expensive meat dish in the universe. Bravo House for giving us such a quality bargain.

So Blondie mooched off my excellent ‘clam risotto’ which, in true keeping with the traditional standards of fine French cuisine, was an understatement. It was not a simple risotto, rather it was reduced down in black octopus ink, gently boiled with correct Italian risotto rice and deeply flavored with clams, together with a few slices of fresh Parmesan. I was in heaven. Thank you, Chef.

At this stage I was clamorings for man’s food. Yes, beef! They had sirloin and fillet which my waiter told me came from Poland (no, I think he made an honest mistake, but it was not Romanian beef) and there was a further option of Black Angus from England. Will every chef in Romania please take note that you can source Angus and Charollais beef here in Romania at last, without going to buy it in Europe.

Blondie and I passed on beef, together with the Alaskan Crab Legs, which we have all seen on the Discovery Channel’s World’s Most Dangerous Catch, where wussy Canadians pretend to be in mortal danger by catching a few crabs. Well, you can catch them here at RON 130.

So I settled for a simple sea bass. But there was nothing simple here. For in keeping with French gastronomic tradition, the description belies the beauty you receive. I had a perfect, fresh, tender fillet accompanied by a wonderful mashed (puree) potato which was shaved with a generous slice of fresh truffle.

I will not recite the menu further, because the chef is clever enough to ‘plate it up’ to such a beautiful degree that you may not recognize your order as it looks as pretty as a work of art on your plate.

Many years ago a far wiser man than I stated that “every dog has his day”. A few years later, a man far more stupid than me stated that “every person shall have 15 minutes of fame”. Well, they were both saying the same thing. And it applies to restaurants.