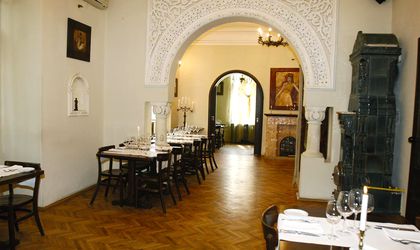 I make it a policy to walk away from a restaurant after I have written it up, safe in the knowledge that after a few months everything will change, from the chef, to the waiters, to the customers. However, when a chophouse proudly announces that they have a new chef and a new menu, it is worthy of investigating. Let’s face it, with those two factors in the mix it is the same as the opening of a new place.

So, Arcade did precisely that and announced they have a new chef and a new menu. I had to take this point seriously as Arcade have proven in the past that they are willing to import fine Western chefs from either the USA or real Europe (remember, Romania will never be part of Europe). The House gets them to train up the local chefs before they return to civilization, and leave us, the customers ,with the benefit.

So let’s check out how their newest imported chef from Milan has impacted on the House.

He has wisely left the House signature dish of Pork Osso Bucco, which is of course a complete contradiction. Osso Bucco should be a gelatinous slice of beef, which I find to be loathsome and full of fat jelly. But this House laughs in the face of that absurd tradition and produces a fabulous fat free pork version which has been both marinated and slow cooked for more than 24 hours. Die for it!

So as befits an Italian chef, he has moved the menu away from its former mid-European leaning to something more Italian. I was surprised that he did not inject purely Milan dishes, Maybe he thinks that his Romanian public does not appreciate pure regional cuisine. Hey chef, we do. And we know the difference, so keep on changing the menu!

Before we get down to the dining, I must tell you about the House. Over the last nine years, Arcade has become a gastronomic institution in this town. It is best known for its fabulous location and vast summer terrace, but you really should go there in the winter to enjoy its warm, homely villa ambiance. And on that subject, you will doubtless also enjoy the company of many unexpected friends, because it is also a doyen of society. Not trashy poseurs, but good solid burghers of Dorobanti.

So let’s get down to the grub. My adorable blondie dining companion chose the wine, which was Prince Matei at RON 125. No, House. That was far too expensive for such an average brand. But I had no complaints about the prices of the food.

Starters, mains and sides were al priced from between RON 12 and 50. Come on people, read that again. This is a top quality, sophisticated chophouse that can compete with the best alternative restaurants in town which could cost twice the price.

So Blondie chose a pasta (linguini) with seafood. I warmed to our honest waiter who truthfully informed me that the House did not make its own pasta, rather they imported expensive dried pasta. He could have lied, but he didn’t.

Blondie loved it as it was loaded with fresh prawns, calamari and mussels. Easy to make? Yes of course. But it was correctly packed out with garlic and fresh tomato. Bravo House.

At the suggestion of my new friend, (my trusted waiter) I rolled over to a dorada a-la-House. My fish was perfectly and moistly presented in a House style sauce, somewhat reminiscent of Blondie’s pasta sauce. I had no complaints whatsoever. Like all good chefs, he twisted the fish dishes to be either grilled or fried in either butter or olive oil. I also twisted the veggie accompaniments on the menu, by adding and omitting the House suggestions.

Away to desserts and we died in heaven with the best Tiramisu ever together with a fruit cocktail which I cannot name, but I have no doubt that the chef just made it up… and it was fabulous.

Arcade is located a hundred meters from the ludicrous Arcul Du Triump, stolen, designed and named after the equally ludicrous, cowardly, defeated Napoleon who designed the same pompous monument in his own glory in Paris. How fitting it is that Romanians built it here in Bucharest, without realizing it was the quintessential monument to defeatism, failure and corruption.