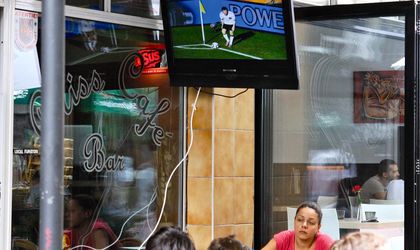 The old center in Bucharest is overflowing with terraces competing to broadcast World Cup football matches with ever wider LCD screens and higher-quality projectors. TVR 1, the national television station, has moved to the next level of technology, by offering the HD option for viewing matches. Sponsors of the global football tournament have also been preparing promotional campaigns. It’s clear the 2010 World Cup is still capturing the imagination of fans in Romania, despite the national side having failed to secure a place in South Africa.

Saturday, June 12 around 10 pm , Bucharest’s Lipscani area. Two friends are unsuccessfully striving to find a free table in the city, greeted with refusals by most of the pubs’ waiters and waitresses, who are holding out for larger, more profitable groups of clients. It seems that the stifling weather has brought all of Bucharest out to the center’s now insufficient terraces – or was it the UK-USA match? Pub and terrace owners have different opinions.

Celebrating football fever, representatives of Mojo Club say they have enjoyed an increase in sales of around 50 percent, a successful payoff for their investment in six plasma screens inside the club and a video projector on the terrace. “Not only have our sales increased, but we have also managed to attract a public who was not familiar with our club,” says Mihai Paveliu, events coordinator at Mojo Club. What’s more, the World Cup matches are also an opportunity for making the club’s services stand out from those of its competitors – the football matches have thus become a pretext for bringing the services specific to Mojo to people’s attention. The broadcasting of matches can be used as a means of advertising, for gaining visibility to new clients who reach the location by chance. Thus, potential clients can be turned into club regulars through all-you-can-drink offers or other creative means of reward, such as free shots given for goals or penalty kicks, says the club’s coordinator.

But Grand Cafe Van Gogh manager and owner, Jerry Van Schaik, has found that, so far, the World Cup matches have not brought a significant growth in sales, at least, not as much as the heat. During daytime, the scorching weather has scared off customers, while the cooler evenings have drawn a significant influx onto the terraces. The slight consumption increase during football matches has not turned out to be generally significant. A considerable growth is however expected when the playoffs start, since, Van Schaik adds, the Van Gogh café is one of the only places in Bucharest that broadcasts matches with an English commentary. Special events, offers and competitions are planned throughout the tournament, pretexts for creativity and originality, including “guess the score” contests, offering various prizes to the winners. The international football extravaganza can also be regarded as a form of openness towards multiculturalism, encouraging customers to wear the symbols of the country that they support, and not necessarily their own, argues Van Schaik.

The football and terrace exodus will also boost beverage consumption, both soft and alcoholic. In order to encourage this and therefore increase profits, terrace managers have come up with special offers. Mojo is offering all-you-can-drink vouchers, while Van Gogh has created a special menu of barbeque sauce ribs, which go well with beer.

Coca-Cola, one of the competition’s official sponsors, is aiming for a sales boost through the usual promotions, ones that it has used previously on its consumers: codes on the beverage’s caps can be sent via SMS or the internet, with the possibility of winning prizes provided by other World Cup sponsors: Adidas and Sony. The biggest prize, however, sends the winner to Johannesburg, South Africa, where the World Cup is taking place. Sony, as the official partner of FIFA for the 2010 World Cup in South Africa, is supporting the Football City project at Zone Arena, where matches will be displayed on a huge HD screen and smaller, 46-inch HD TVs, with 3D TVs displaying short clips of the most recent matches.

Although not a sponsor of the FIFA 2010 Championship, Bergenbier, the former Romanian national football team’s sponsor, has launched a comfort campaign for the country’s football fans, with the aid of the team captain, Cristian Chivu. Its message is that although Romania is not taking part in the finals, beer can still be enjoyed with friends.

Drinks companies are not, however, the only financial winners of the 19th FIFA World Cup. Betting companies are reporting that the number of visitors to their websites has doubled since the last tournament in 2006, mostly due to improved internet security, BetBrain representatives say. What’s more, since 2006, the number of clients has substantially increased due to the launch of Romanian sites for international betting services providers, such as Gamebookers, Bet365 and Bwin, say officials, a comparison service for odds supplied by betting companies.

TVR, the Romanian television station broadcasting World Cup matches, has become audience leader during its match coverage. The highest ratings were reached during the UK-USA game on June 12, with a 6.9 average rating, with 9.6 as the audience peak during the Italy-Uruguay match. On the occasion of the tournament, TVR has launched HD services, as well as the possibility of watching football matches online. The site’s traffic has reportedly tripled, reaching 45,000 visitors daily since the World Cup’s debut. Moreover, for the first time in Romania, Telesport, another television channel, will broadcast eight of the football games live between June 22 and 25, along with another 44 pre-recorded games. TVR was obliged by law to sublicense the right to broadcast World Cup Games and DigiTV, the Telesport operator, was the winner of the auction. Telesport is broadcast exclusively in the UPC and Romtelecom Dolce networks.

The 19th FIFA World Cup will end on July 11. The perspectives for profit that the competition offers to all those involved in the games, ranging from sponsors to broadcasters, are enormous. Yet, so far, in Romania, commentators say there is still room for improvement, especially when it comes to the official sponsors of the competition, who have opted for predictable, conventional and not highly visible communication. Although Romanians are football lovers, if the national team had been taking part in the competition, local companies could have expected a much bigger payday. However, while waiting for another golden generation to live up to the legacy left by the likes of Romanian football royalty Gheorghe Hagi, local football fans will have to settle with the next best thing, supporting their second favorite team.