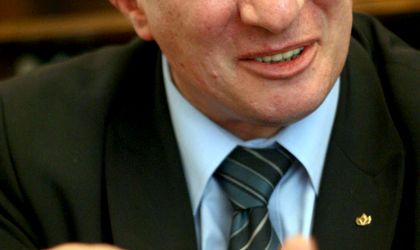 What are your targets as minister of communications and information technology?
I want to continue the development of projects involving IT&C legislation, the governing program as well the strategic plan of MCTI. I plan to continue with the privatization of the National Post Company, Romtelecom and the National Company of Radio Communications (SNR). The strengthening of the public-private partnership for the promotion and development of trade and exports is also needed, for which the Council for IT&C, a consultancy body for the Romanian government, will be established.

What projects is the ministry currently running and what budgets do they have?
The “Economy based on knowledge” project is already well-known with about a $70 million budget to be invested. The project will provide access to information society services for about 250 communities in the country. The ministry's support for new technologies, like WiMAX, is also meant to diminish the digital [TV broadcasting] gap among the country's population.
The ministry has a significant interest in managing projects financed with structural European funds in the field. In November, the ministry will launch the call for starting e-economy development operations, where EUR 31 million is available for medium sized companies. In the first couple of months of 2008 the start of the e-governance, e-learning development and the interoperability-among-systems projects will be made, with about EUR 45 million funds available for the local and central administrative bodies in the country.
The European funds allotted to IT and communications for the public and private sector are EUR 383 million, while the value of the projects to be developed in the next seven years was estimated at more than EUR 550 million.

What is the stage of the listing process of Romtelecom? When do you estimate the process will be started?
We will be analyzing the listing option until the end of the year; it all depends on the financial evolution of the company. I hope that 2007 will be the year of financial equilibrium for Romtelecom, which will allow the listing of its shares on the stock exchange. The majority shareholder of the company, OTE, thinks that the situation of the company needs to be stabilized, after which the possibility of re-launching the initial public offering should be considered. In the contract we have with them it is specified that a package of more than seven percent of shares cannot be listed without the consent of the majority shareholder, and a package smaller than seven percent is not attractive.
As in the case of the Romanian Post, we want to create powerful brands, with diversified services for residential as well as corporate customers.

Did the restructuring of the National Company of Radio Communications start yet?
The restructuring of SNR has already started with the laying off and redistribution of some employees. More than 350 employees, about 15 percent of the entire company staff were dismissed, out of which more than half already took voluntary redundancy. Another 40 employees will be redistributed to sections of the company where there is a lack of personnel, especially in remote or high altitude working points.

How do you expect the local IT&C market to evolve?
The local IT&C market is continually growing, a visible trend especially in the last couple of years when the sector's contribution to the gross domestic product increased to 3.94 percent in 2005 and 4.19 percent in 2006. The growth of the local IT&C sector is known at an international level due to the decision of large companies like Advanced Micro Devices, Amazon, SAP,
Intel Capital, Oracle, HP, Siemens and Microsoft to invest on the
local market. These investments show the increased level of confidence that these companies have in the communication field in Romania.
Currently, the small and medium-sized companies operating in the field are also facing an important development, in all the areas of the country, and their future development will be sustained by access to European funds.