Restaurant reviewaa‚¬A¦ And a little wine with your food, sir? 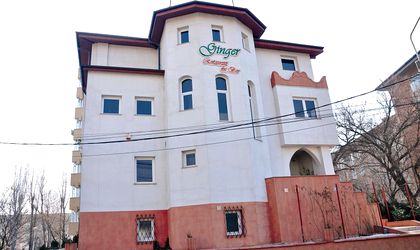 My night started off badly, as I was going to Restaurant Ginger in the wrong part of town. I drove past Gara de Nord and straight on in a depressing area, and saw the House next to the giant underpass and opposite the Jaguar showroom.

Given the rundown location, I was tempted to return home, but then again, having made the effort, I thought ‘what the hell, I may as well go in’. Little did I know that I was about to encounter one of the greatest surprises of my culinary life!

The décor is not to my taste at all. I will leave it at that. Blondie and I sat in far from luxurious surroundings, and perused a menu where all dishes were so inexpensive, with main courses priced around RON 30 lei, I thought it was simply a normal neighborhood eatery for the apartment block residents – but no, I was in for a surprise. For when I asked for the wine list I thought it was a bluff. For it would be the equal of the finest restaurants and hotels anywhere in the world.

For instance, my eyes fell on a Chateau Petrus 2001, yours for EUR 3,300. No, I refused to believe it. A further glance at the wine list revealed hundreds of fine wines from every serious wine nation on the planet ranging from all of Europe, South Africa, the USA and Latin America. It was not simply a vast selection, but it was the finest wines that those countries produced.

I demanded of the manager to see the wine cellar, and the smile on his face oozed so much confidence that I realized I was in for a beating. And that is what I got. For not only were there cases of Petrus, but next to them was my favorite wine, Opus One – a wine so rare I have problems getting it in London because the Yanks buy up every bit of it from the Mondavi vineyard… and so reasonably priced at RON 2,500. I looked around the cellar and saw some of the finest wines in the world – all here in grubby Bucharest. There was also another of my favorite wines, Chateau Margaux Gran Cru Classe 1991, with all wines piled high to the ceiling!

For Champagne lovers there was Lanson, Tattinger, Heidseck, Moet, Roederer, Krug and Cristal. That covers the entire Champagne market.

My head was spinning after the cellar, so I had to eat. The menu can best be described as ‘Romania meets Europe – just’. So away I went to a starter of foie gras terrine. It was fine, but what made it memorable was the bargain price of a mere RON 23.

I passed on other starters, such as a choice of five bruschettas topped with a selection of cheese and tomato, or smoked chicken, or feta cheese with herbs and nuts, or roast beef, or smoked duck. And all of them priced around RON 6.

But I needed wine and although I have told you of their premium stuff, they had normal wines at the normal starting price of RON 19 for a Chianti, or RON 29 lei for a Spanish Tempranillo. Even the House’s normal wine list at reasonable prices would put every restaurant in the country to shame. For under the French section alone, they had Bordeaux represented by St Esteph, Haut Medoc, Pomerol and St Julien, all of which were dated around 2003-4. I defy you to

find a quality supermarket bottle of wine in this Godforsaken country which is older than a 2007! But the House had them all.

So I settled for a bottle of Bulgarian Enira Reserva 2006 at RON 46, and it was magnificent.

Back to the food. Blondie ordered a turkey breast with buttered vegetables, baked potato and green pepper sauce, at a bargain price of RON 28. It was fine, but she was not adventurous enough to order the sexier ‘mutton baked in a pastry crust with baked potato and berry sauce’ at RON 39.

I wanted to go for beef, but given the size of their two offerings, a T Bone kicking in at 700 grams or a Porterhouse at 800 grams… I knew I could not tuck into that fabulous size of ‘real man’s food’. It was too large for my newly dieted, slim athletic body! So I settled for a roasted duck breast which was also huge. It came with a trio of cheeses made into a light sauce together with vegetables and baked potato at a mere RON 39.

We both passed on their fish section, which included a ‘grilled salmon with black risotto and garlic sauce’, weighing in at 400 grams, but at RON 29. But now a word of warning. Many of their dishes include a baked potato. If you choose this, you have wait for some 20 minutes. But it will be worth it.

If you know your wine, you must – must – go there even if you do not intend to eat. Do not let the location or appearance put you off. Go! They are closed on Sunday and Monday.