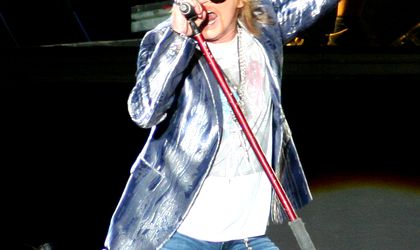 Around 20,000 fans gathered at Bucharest’s Romexpo on the night of September 21 to watch one of the biggest bands in rock history perform. From sixth-graders brought along by their parents to ageing rockers in their 40s and 50s, all came to see a live rendition of some of the 1980s and 1990s’ best known tracks, some with high hopes and most perhaps just out of curiosity to see what Axl’s new band was capable of.

Having grown up with their music and been anticipating a reunion since the age of 11, when I already knew every song on the Use Your Illusion 1 and 2 and Appetite for Destruction albums by heart, it would be unfair to say that the concert did not live up to expectations. Those expectations, in fact, were not that high to begin with. It has been all over the press that Axl has become a bit too eccentric, that this new band bearing the Guns n’ Roses name has nothing in common with the November Rain supergroup, that the lead singer might show up very late – or not at all.

At around 22.15 the concert, organized by D&D East Entertainment, began, one hour and 45 minutes later than scheduled. In the run-up, it seemed more like a social event at which small groups of people gathered to eat, drink and chat. The more vociferous audience members had already started to voice their displeasure loudly after the barely noticed opening act, the Canadians Danko Jones, had ended their set. But to the rhythms of Welcome to the Jungle, the second song in the evening’s set-list, a more positive vibe began to assert itself. Throughout the concert, the audience rocked out more to the sounds of the band’s golden oldies than to more recent songs from Chinese Democracy.

All in all, the concert in Bucharest was the type of performance a fan would have regretted missing. Sure, Axl is older and heftier and his voice could have been better (but it was no worse than when the rocker was at the peak of his popularity – Axl’s high notes would be challenging for many live performers). His band shamelessly went through the hits made famous by Slash, Duff McKagan, Izzy Stradlin and Steven Adler, giving exemplary renditions of the likes of Don’t Cry, November Rain, Nightrain, Live and Let Die, Knockin’ on Heaven’s Door, Paradise City, Rocket Queen and even the more recent effort Better. Exemplary, but without too much of the original soul and revolutionary spirit for which the 1980s band was known.

Moreover the concert suffered from a poor sound system, which saw spectators easily able to carry on a conversation during the show without too much effort. The cold weather was yet another downer, and seemed to persuade some fans to leave the open-air venue prior to the end of the show. The organization also attracted complaints from some ticketholders, due to the unfortunate positioning of the scaffold tower from which the concert was filmed, the large queues that formed at the insufficient lavatories, as well as the chaotic entrance procedures.

At the end of the over two-hour extravaganza, after a dignified performance that saw a friendly Axl Rose in good form, one might wonder: what happened to the man who could raise entire stadiums through his riotous shouting and anti-establishment behavior? Still a powerful presence on stage, the angry young man who energized audiences seems to have been replaced by a much more peaceful middle-aged, resigned-looking cowboy type. It’s in his hands, however, whether or not this band will continue the legacy of its legendary name, as it appears to have plenty more to say and to offer. But Axl, don’t wait ten years to make another statement, it might be too late!