On October 2, Broadway moves to Bucharest with a new performance of the “My Fair Lady” musical 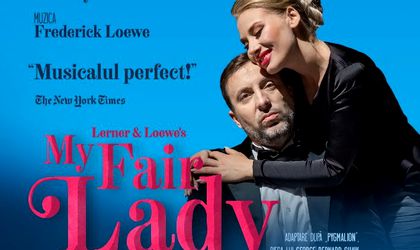 At the top of the most highly recommended shows from the beginning of this autumn is “My Fair Lady”, one of the most long-standing and successful musicals of all time. The current version of the famous love story, one that is full of humor, will take place on October 2, at the Palace Hall, from 7:30 pm.

The cast of the show brings together top performers of the Romanian stage, live orchestra, choir and ballet band.

Irina Baianț, Ernest Fazekas, Aura Călărașu, Adrian Nour, Ecaterina Ladin, Ionuț Burlan, Filip Ristovski, Irina Bucescu, Ovidiu Ușvat and a team of over 70 professionals of the stage invites you to witness a unique experience, walking in the fascinating world of Eliza Doolittle – the modest florist who evolves so much that she is perceived as a lady in high society.

With impressive decorative elements, hundreds of costumes and outstanding performances, the show masterfully portrays the atmosphere of London markets and the fascinating and sinuous love story between a phonics teacher and a simple florist. Exceptional music, performed by the live orchestra conducted by conductor Daniel Jinga, completed by the chorus and the spectacular choreographers of the ballerinas have won the public’s appreciation, the musical “My Fair Lady” being widely applauded on the open stage.

The Palace Hall in Bucharest is the scene where you can watch the meticulous production of the musical “My Fair Lady”, by director Răzvan Ioan Dincă.

Those who have not yet had the chance to watch the humorous and sensitive story of the musical “My Fair Lady” are invited to live this extraordinary experience on October 2nd.

Tickets can be purchased from the Iabilet.ro network, as well as from Flanco, Diverta, Cărturești, Unirii 1 subway station, Music store, IQ BOX, Human, Libmag, Ballet house, from Selfpay terminals, at variable prices. depending on the place category.

With an exceptional distribution, the Palace Hall scene will become the universe in which one of the most beautiful stories of all time will unfold.

The musical “My Fair Lady” is based on the text of the play “Pygmalion”, written by George Bernard Shaw, whose main character is a figure from Greek mythology, Pygmalion, who fell in love with a sculpture he created, and it came to life. . Shaw wrote the play in 1912, and the premiere took place at the Hofburg Theater in Vienna on October 16, 1913.

Considered today as one of the most long-standing and successful musicals, “My Fair Lady” had its world premiere on Broadway (New York) on March 15, 1956 and on the West End (London) two years later, becoming a legend in the world of music shows.

The Broadway show has 7 Tony Awards in the portfolio (6 of them for the original version), including “Best Musical” and “Best Director”, a Theater World Award, 5 Olivier Awards (for the 2001 London reprise) and over 2,700 representations in total for the original production – an absolute record for those times.

Currently, the famous musical is included in the repertoire of theaters around the world, including in the United States, where, in 2018, almost all the performances on Broadway were played with the house closed, the show positioning itself several times as a leader. of sales.
Viewers will be able to admire soprano Irina Baianț as she plays the role of Eliza Doolittle, a young florist from London who takes diction lessons from linguistics professor Henry Higgins. The teacher, a fascinating character that comes to life in the masterful interpretation of the actor Ernest Fazekas, bets that he can turn her into a real lady. Under the constant influence of tasty moments of the language and funny situations, the show will be completed by notorious artists, such as: Adrian Nour (Colonel Pickering), Ecaterina Ladin (Mrs. Pearce), Ionuț Burlan (Alfred Doolittle), Aura Călărașu (Mrs. Higgins), Filip Ristovski (Freddy Eynsford Hill), Irina Bucescu (Ms. Eynsford Hill) and Ovidiu Uşvat (Zoltan Karpathy).

The current installation of the show was first staged in 2016, on the occasion of the 60th anniversary of the world premiere of the musical, the performance enjoying success and appreciation among both the public and the specialized critics.