“Mamma Mia!” returns to Bucharest in a love story full of color, dynamism and adventure 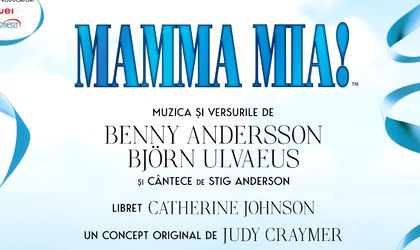 “Mamma Mia!”, one of the most beloved shows in the world, returns to Bucharest’s Palace Hall with two performances in October 2019. The cast includes famous names from the Romanian artistic world.

Loredana, Horia Brenciu, Ernest Fazekas, Aurelian Temisan, Anca Turcasiu, Ana Munteanu, Anca Sigartau, Cornel Ilie and Adrian Nour are just a few vibrant and beloved artists from around the country, who will play the main roles in the famous production. In the two upcoming performances, the artists will dance and sing along with the audience in a romantic love story full of energy, enthusiasm, fun, and color.

On October 30 and 31, at the Palace Hall, starting at 19:00, you can watch two absolutely exceptional casts, in a live show full of adventure that you certainly cannot resist.

“Mamma Mia!” Presents the story of Sophie, a young woman on the eve of the wedding, who wants to meet her natural father and be led by him to the altar. But she is not sure who he is! So she decides to invite all the three men from his mother’s romantic past to a small Greek island, without revealing her motive. Things will take completely unexpected turns, which will create many fun moments.

The musical “Mamma Mia!” Was released in 1999 in London West End and then in the United States, on Broadway. Dramatist Catherine Johnson and producer Judy Craymer created this show based on songs by Benny Anderson and Bjorn Ulvaeus, former members of the ABBA band. Due to its success, the story was adapted for the big screen in 2008, with actors Meryl Streep, Amanda Seyfried, Pierce Brosnan, Colin Firth and Stellan Skarsgård in the lead roles, and in 2018 a Mamma Mia 2 movie was released.

Tickets for the performances that will take place on October 30 and 31 at the Palace Hall can be purchased in an electronic format from Iabilet.ro or from the stores Flanco, Diverta, Cărturesti, Metro Unirii 1, Music, IQ BOX, Human, Libmag, The Ballet House and the Selfpay terminals, at prices between RON 99 and 289.