Lights, camera, on: who’s behind the cameras at TIFF? 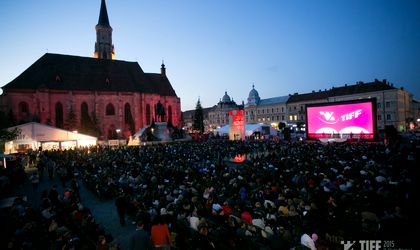 It’s been two months now since the great Transylvania International Film Festival (TIFF) 2017 has ended. I’m pretty sure that most of the highlights of this edition already appeared in your newsfeed, whether Facebook, Instagram or mass media. While enjoying the most important film festival of the country, I was wondering how TIFF is seen exclusively through the camera’s lens – and most important, how is like to be on duty for this rollercoaster of amazing events. So the communication department of TIFF allowed me to interview those who photograph experiences, moments and historical moments.

But what’s TIFF for the official team of photographers?

This article captures a small fragment of what these six amazing photographers have managed to do on this edition of TIFF. Every photographer was interviewed and the entire story between the creators of the photos and TIFF is published on Business Review, as the links behind will guide you.

It’s something magical about the opening gala …

“My favourite picture from TIFF is the one from the opening gala, made through the watch of the Sf. Mihail Church Tower. This is my favourite photo for four years now. From that Tower you feel how TIFF is the heart of Cluj Napoca. And also you witness the birth of a new edition of the festival. Also, you realise how is the festival growing year by year. It’s an indescribable sensation. The silence above the city which is troubled only by the mechanism of the watch every minute, as well as the heart beats for the effort of going up there and the soundtrack of the movie, and the wind breeze,” says Nicu Cherciu, who has been to the team for ten years now.

Read more: Behind the camera lens of TIFF 2017 with photographer Nicu Cherciu

… and the magic continues to the cinema halls, when movies’ theme inspires everyone:

“I have 11 favourite photos. I had to choose one of them. I’ve always said, “If you want to make a photographer go into depression, you just have to make a selection of his photos.” I picked this photo from “On Body and Soul”. I do not know if it’s my favourite photo from TIFF, but it’s definitely the photo that reflects the most of TIFF. And not necessarily as a festival, but as a reason to gather together hundreds of different people who have in common a few thousand lumens designed on a white wall. That’s cinema. A white wall that has the power to inspire, to excite, to change. It’s about people who do not need chairs to look at a movie, the people who are lying on the aisle just to be permeated by this movie through “body and soul.” And I’m just glad I was able to surprise that. This picture of mine is about people in front of the screen and behind it. Because they are the people who live the emotion, and when I review my photos, I have the same emotion as those who see the movie,” explains, Marius Maris, who’s new to the TIFF team.

Read more: Behind the camera lens of TIFF 2017 with photographer Marius Maris

Also, the legends invited as special guests and captured for a few seconds in the best shot of the camera play an amazing role:

“The photo with Alain Delon hugging a child after receiving a big floral bouquet is my favourite photo. It was a genuine moment which happened before us for only 2-3 seconds. It shows us how important things happen right before your eyes if you pay attention to the event,” remembers Vlad Cupsa, who has been working with TIFF for two years now.

Read more: Behind the camera lens of TIFF 2017 with photographer Vlad Cupsa

And it’s more than technical capabilities as a photographer …

“The favourite photo is even from the closing gala with the guest of the festival, Alain Delon. I did not choose this picture because it would be perfect from a technical, composing or light point of view, no, but more for the surprised moment. This is about the festival, it offers the perfect context for more natural feelings and moments,” as explains Dan Grigore, who was also part of the TIFF crew for the first time.

Read more: Behind the camera lens of TIFF 2017 with photographer Dan Grigore

… and the amazing artists you meet:

“It’s hard to decide but I would choose the portrait of the British writer and lecturer on film, Geoff Andrew. What I love the most about this particular photograph is the lighting, the emotion in it and the experience of that moment,” underlines Raluca Ciornea, who has been picturing the festival for the TIFF’s blog and Instagram page.

Read more: Behind the camera lens of TIFF 2017 with photographer Raluca Ciornea

But most important, the moments between the moments, as photographer Chris Nemes beautifully explains:

“I think my favorite photos are the ones that capture the moments between the moments. The one image I think is representative for TIFF was taken at Bontida castle before the projection when everyone was chilling, enjoying the sunset and waiting for the cine-concert to begin. I approached a small group and saw that they were having an improvised picnic. The photo captures some salami, bread and tomatoes right next to an issue of AperiTIFF (the festival’s daily paper). I believe this concentrates the essence of what the festival tries to be – a manner of enjoying art without feeling contrived or too formal.”

Read more: Behind the camera lens of TIFF 2017 with photographer Chris Nemes