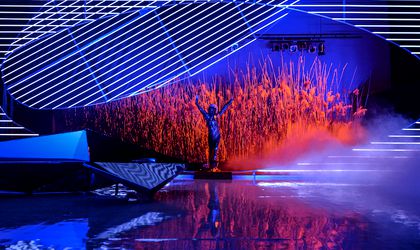 Last week, the National Theatre Radu Stanca Sibiu (TNRS) presented their Micro Stage program, supported by BRD, a multi-lingual journey between several shows, some presented by the actors from TNRS, some by the students of Department of Drama and Theatre Studies, University Lucian Blaga Sibiu.

Some remarks over the Micro Stage 2018

I’ve arrived in Sibiu in the middle of a winter wonderland at the end of March, directly to the theatre. And I remained in this wonderland, being packed with a young crowd of theatregoers waiting to catch one of this performances mentioned above. You are about to read some remarks about the plays, while I am not a professional theatre critic.

The first performance was Scenes from a Marriage / Szenen Einer Ehe in German, with special headphones for the Romanian translation. According to the official information, 11 years after his French-language production of “Scenes from a Marriage / Szenen Einer Ehe” for the Theatre of Esch, Charles Muller is returning to Bergman’s play, this time in German, for a co-production of the Theatre of Esch-sur-Alzette from Luxembourg with the German Department of TNRS. In the cast was Krista Birkner of the Berliner Ensemble and Daniel Bucher, an actor of TNRS that together bring value to the essence and strength of the text. The performance deals with well-known themes, situations usually faced by married couples, in which audience members can easily recognize themselves, and the set realized by Dragoș Buhagiar will impress through its dynamic and ingenuity. As for me, it was quite unusual to be so close to the scene – the chairs are on the stage, not in their original setting. And the unusual feeling remained there, listening some slices of real life and how the woman humiliate herself in the name of love – or more precisely, in the name of being comfort in a not functioning marriage relationship. Moreover, the decadence of woman went on and on all the performance, with a climax even scarcer: she is being slapped (or even beaten, you can’t know, the scene happens behind the door) and she still kisses him in the end. The woman in me didn’t feel comfortable at all seeing this performance, and the fact that I was so close to the scene even made me think to slap the husband. In terms of scenography, Scenes from a Marriage has quite good video effects. Must see and must go home with the lesson: stop humiliate yourself in front of the man is your partner.

Next day, I saw “The Emigrants”, after Polish writer Sławomir Mrożek. TNRS describes the performance as something that brings to the audiences’ attention the tragic of human existence, both from the perspective of an exiled pseudointellectual, as well as that of a construction worker. The performance, directed by Dan Glasu, was realized at the initiative of the two actors from the cast, Alexandru Malaicu and Ioan Paraschiv. The two are brilliant together and this performance was the only one this Micro Stage which really made me remembered why I love theatre so much. The acting was quite impressive and the feelings transmitted by the two actors were so intense. It’s complicated to talk about your deep fears, your dreams and your hopes. It’s even more complicated when your life is currently at the limit of subsistence, living in a basement, without basic needs being covered. And in the end, you leave with some questions about your own life. Definitely a must see.

Then it was “The good person of Szechwan”, after B. Brecht, which tells the story of Sen De, a prostitute blessed by the gods after she hosts them for one night. Directed by Anca Bradu, the performance is an incisive chronical of the human character that brings into focus the theme of good in relation to sacrifice. “The huge importance Brecht has in the contemporary theater culture is connected to the concept of epic theater. This phrase does not belong only to literature, but it also conveys the German playwright ‘s aspiration to reconfigure an art of synthesis by combining all literary genres, with the performance of actors who split themselves into character and narrator, with the abstract expressiveness of suggestive, not depicting, stage sets, with the musical expressiveness of songs meant to poetically advance the preceding narrative episodes”, says the official description of the play. But it’s more than that. It’s a journey through a world made of poverty, corruption, vulgarity and wilderness of a female character, a world where the tablet of greater values has been long broken. What’s more, the end remains opened, which becomes a challenge for theatergoers to confront themselves. Quite good, if you are willing to make an intimate journey of your own behavior.

“10” was presented as an original project of the creative team, inspired by the Ten Commandments of the Old Testament. It’s a journey which represents the moral code of the people of Israel, and also stood as the ethical foundation for the whole of Christianity for two millennia. The text contains ten stand-alone, but also interconnected scenes, with ten main characters. The puzzle-like structure isn’t easy to follow and in my personal case, I couldn’t do it. Probably my disconnection with the play comes from the fact that the topic presented was outside my interests.

The young actors from the Department of Drama and Theatre Studies of the Lucian Blaga University of Sibiu were pretty amazing in the “Paper planes”. The play, “Paper Planes” by Elise Wilk, is a short and painful excursion into the secret universe of adolescence, pictured with violence, love and loneliness. It’s a must see, not necessarily for remembering you as high school student, but for taking into consideration some feelings each and every one of us had in those time. And to see if there are still open wounds.

Last but not least, “Hedda Gabler” was the most expected performance of TNRS. It stands for “Hedda Gabler holds our hand and brings us back to reality. She introduces us with the universe that surrounds us, but which we negate, because it is not only ugly, but also painful.The themes are the same as they have been for millennia: the complexity and fragility of human relationships, the kindness and vulnerability of people, the violence that hides in our daily lives, Eros and manipulation. Beginning with these subjects, we find on stage a timeless space where we can encounter and confront our own demons. There are no real solutions. The performance is a techno-poetical installation. A group of young creators. Fresh energies.” As for me, I really appreciated the video/sound design and that’s all. For the first time, I couldn’t get neither the message, nor the character of the leading actress of TNRS, Ofelia Popii. Once again, it’s me and my lack of knowledge. After all, we can’t like all everything staged, can we?

Take a look on www.tnrs.ro to see when these plays are going to be staged again.