Get on your bike! 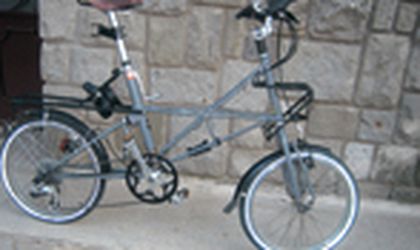 Anxiety is growing about the price of oil, which has quadrupled in recent years and shows no sign of coming down. Suddenly, renewable energy and alternative forms of transport are looking more attractive than ever before.
As a long term resident of Bucharest (I first came here in 1986) I can guarantee that there is no better way of getting around town than a bicycle; it is fast, cheap and healthy. And I have tried it all: car, bus, tram, metro, foot, skateboard. Cycling is ideal for business people as they value their time, health and money. But you do have to be aware of the risks.
There's no point dabbling in cycling. If you get a cheap bike, you will have immediate maintenance problems and you will feel unsafe in traffic (and it will take up a lot of space). But if you are willing to invest in a serious bike, and all the accoutrements, you will feel in control when in the middle of Piata Victoria, you will be able to repair that puncture, keep your documents flat, and stay dry in an unexpected downpour. A good bike will last for generations.
People say cycling in Bucharest is for madmen: the traffic is too dangerous; the pollution is awful; the drivers are terrible; etc. Not true. I find Bucharest a great city to cycle in, but I have the advantage of having been an experienced driver: it is essential to observe, understand and predict the behaviour of drivers; and you also need to show them respect. I also invest in great bikes, but far less than I ever spent on cars. I recently bought a Moulton Touring Bike for about USD 2,000 and people think I am mad. But when I spent ten times that amount on the Honda Accord it was considered a wise decision (I subsequently ditched the car).
Over the years I have discovered a network of pavements, parks and tracks that can get me across town in a spirit of discovery and tranquillity (and at speed). When I am on the open road I compete with the cars in terms of speed and I also respect the rules of the road. I even take my kid to kindergarten by bike every day. I find Bucharest drivers actually quite attentive and my main rule of survival is “Be seen. Be predictable”, in other words don't appear out of nowhere, don't slalom, keep in a straight line, stop at red lights, respect the (unwritten) rules of the traffic. Above all, don't behave like a stunt rider.
What about the heat? The rain? And getting to the office all sweaty? And parking? Theft? None of these are problems, although everyone assumes they are. Dealing with the heat is easy; I just go to the bathroom and have a wipe down with a hand towel, and often go to serious meetings looking respectable. As for rain, I have a goretex jacket rolled up in my pannier. Parking? Not a problem; there is nowhere where a friendly railing, gas pipe or tree cannot be found. Theft? The Romanians are years behind the Dutch, British and Americans when it comes to stealing bicycles. But you do have to invest in the gear: you need mudguards (many bikes don't have them), a backrack, good panniers, a pump, basic tools, waterproof gear, the right shoes and a helmet. A good source for all of this is www.biketrax.co.uk, which is where I source all my bikes and gear (sometimes sent by courier). Only problem is they are based in Scotland

Rupert Wolfe Murray welcomes your comments about cycling in Bucharest and can be contacted via his blog: www.productive.ro/blog.