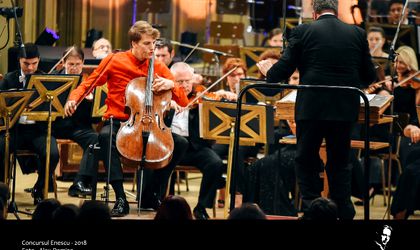 Estonian Marcel Johannes Kits is the winner of the Enescu Cello Competition 2018, after a final where he performed the Cello Concerto No. 1 in E flat major op. 107 by Dmitri Shostakovich. Yibai Chen (China) ranked second, while Stanislas Kim (France) and Shizuka Mitsui (Japan) ranked, respectively, third and fourth.

For the first time in the history of the Enescu Competition, the jury has decided that four young musicians enter the Cello Section Final, instead of three as it was previously decided. This choice is motivated by the high artistic level of the competitors registered in the 2018 edition of the competition in Bucharest. The specialized jury of the Cello Section is formed by: David Geringas, (jury president), Raphael Wallfisch, Leonid Gorokhov, Alexandra Guțu, Jian Wang, Tsuyoshi Tsutsumi, Myung-Wha Chung, Philippe Muller and Marin Cazacu.

Marcel Johannes Kits from Estonia, aged 23, won the First Prize of the Cello Section at the George Enescu International Competition 2018. For the end of the Cello Final he performed the Cello Concerto No 1. in E flat minor op. 107 by Dmitri Shostakovich, accompanied by the George Enescu Philharmonic Orchestra, under the baton of conductor Paul Watkins. The second prize went to Yibai Chen (China), the third prize went to Stanislas Kim (France) and the fourth prize to Shizuka Mitsui (Japan).

The Estonian Marcel Johnannes Kits, born on the 2nd of May 1995, plays on a cello made by Francesco Ruggeri in Cremona, 1674 and with a bow made by Victor Fetique, both on loan by the Deutsche Stiftung. He is studying at the Berlin University of the Arts with Prof. Jens Peter Maintz and has participated in several masterclasses with Maria Kliegel, László Fenyö, Wen-Sinn Yang, Jan-Erik Gustafsson, Marko Ylönen, David Geringas, Steven Isserlis. Furthermore, he performed as a soloist with various orchestra such as the Estonian National Symphony Orchestra, Tallinn Chamber Orchestra, Pärnu City Orchestra, Latvian National SO, Württembergische Philharmonie Reutlingen, Jerusalem Symphony Orchestra, St. Petersburg SO. Marcel is a laureate of the International “Dombrovsky” Competition and the “Johannes Brahms” Competition.

The prizes of Enescu Competition

David Geringas, President of the Jury, offered also a special prize consisting of a scholarship at Blackmore International Music Academy in Berlin and Vienna. Moreover, conductor Paul Watkins offered the winner Marcel Johannes Kits the possibility to perform together on an international stage next year.