FILMREVIEW: Tales of the Golden Age Part I 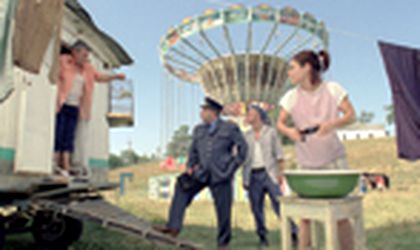 Tales of the Golden Age Part I is the latest feature from local director Cristian Mungiu, whose 4 Months, 3 Weeks and 2 Days brought Romanian cinema to international prominence after it won the Palme d'Or at Cannes. His new effort marks a significant departure from the bleak abortion drama. Not only is this a comedy – and a hugely funny one at that – while 432 provoked as many laughs as being hit repeatedly in the face, but Golden Age is a portmanteau film, made up of four (or five) vignettes, all based on urban legends from the Communist era. Mungiu also shares directorial duties with four others, each of whom took charge of one segment. Which stories feature varies from screening to screening, a wry comment on the vagaries of the times. After his Cannes acclaim, Mungiu could presumably now be living in the Hollywood hills churning out formulaic melodramas, if he wanted, so it's encouraging to see him sticking to his roots. It's also refreshing to see a light-hearted take on the Communist era. Much of the recent output of Romanian new wave has been grim (unsurprisingly – the country's recent history has not exactly been a barrel of laughs), and while such films as 432 and The Death of Mr Lazarescu were undeniably important, high-quality productions, they didn't make easy viewing. Not so, Tales from the Golden Age, which is brimming with laughs from beginning to end. Both the characters and situations are suffused with wonderful comic potential. Of course, Mungiu had plenty of material to mine. Looking beyond the human suffering, the confusion, pomposity, blinkeredness and distortions of the Communist regime clearly cry out to be satirised. And just as international audiences who watched 432 or Lazarescu will have left thinking that life cannot really have been that bad, so too will foreigners view Golden Age as more of an absurd/surreal comedy, while Romanians will recognise much of their own experience up on the screen.It certainly lacks the dramatic punch of the main director's last film, and that along with the short-film structure may mean that Golden Age does not create as many waves internationally as 432. But if foreign audiences give it a chance, they will not be disappointed. The human failings depicted here – selfishness, greed, pride, myopia, foolishness, obsequiousness – are by no means specific to Communists, and even someone who comes to this film knowing nothing at all about Romania's past will find plenty to enjoy.Mungiu is taking several risks here, not only with the portmanteau structure, which can deter viewers. A comedy about Communism could seem a glib way to portray an era in which so many suffered so recently. It could also patronise the characters. But the warmth and humanity that imbue this superb film allay such concerns. It may be premature to talk about a golden age of Romanian cinema, but this is definitely a welcome ray of light.
Debbie Stowe
Directors: Cristian Mungiu, Hanno H