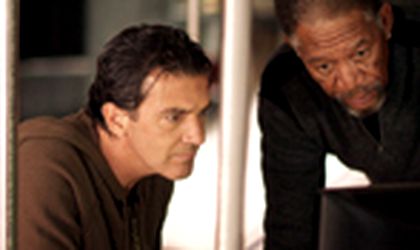 Everybody loves a heist movie. While in real life, the type of person who robs banks is a brutal career criminal who would shoot your face off for a few thousand dollars, on screen bank robbers seem to have acquired an elegance and chutzpah. They are the Fred Astaires of the criminal world, debonair, graceful and ever on hand with a nifty move to surprise and delight the audience. We're always going to be rooting for the gang, as they ingeniously outwit the dim-witted cops again and again. From the cream of the crop – classics like The Sting, The Italian Job, The Ladykillers and modern day greats such as The Usual Suspects and Inside Man – to the merely diverting – After the Sunset, Matchstick Men, Entrapment – it's quite difficult to squander all that audience goodwill and make a disappointing caper movie. But it has been achieved here.
In debt to thuggish and monosyllabic Russian gangsters (is there any other kind?), legendary diamond thief Keith Ripley (Freeman) is back for One Last Heist. Think of him as a latter-day Cary Grant in To Catch a Thief, minus most of the charm. But the heist in question – stealing two hitherto unheard of Faberg