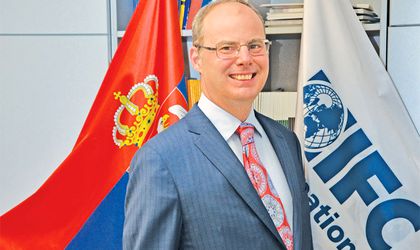 Thomas E. Lubeck, Regional Manager for Central and South East Europe at IFC, will be a speaker at Business Review’s Foreign Investors Summit, taking place between October 30 and November 1 at the Sheraton Hotel in Bucharest.

Thomas will hold the Keynote speech on the first day of the event, October 30. The day will include panel discussions, debates and moving-forward notes from decision makers, major actors and officials focusing on one main topic: improving how business is done.

A U.S. national, Mr. Lubeck has held several leadership positions within IFC. Previously, he served as the Regional Manager for the South Caucasus during which time he oversaw a significant expansion of IFC investment and advisory activity. Under his leadership IFC supported renewable energy, agribusiness and the banking sector which was hard hit by regional conflicts and the global financial crisis. IFC also helped the South Caucasus countries significantly improve their investment environments through IFC’s advisory services.

Mr. Lubeck joined IFC in 1997 as an investment analyst and has since worked in Southern Europe, Latin America and South Asia. He holds a Masters in Accountancy from George Washington University in Washington, DC.