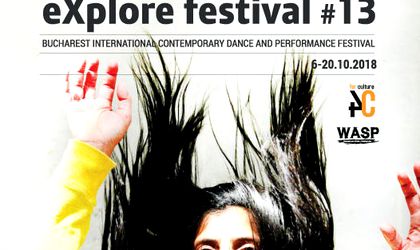 The 4Culture Association and WASP Studios announce the thirteenth edition of the eXplore festival – Bucharest International Contemporary Dance and Performance Festival, the most important event in Romania and Eastern Europe dedicated to contemporary dance and performance, taking place between the 6th and 20th of October 2018.

“eXplore festival invites to reflection and generates dialogue through the artistic manifestation, positioning Romania on the map of the most important contemporary dance events in Europe. Choreographers who are appreciated on an international scale come on this occasion in Bucharest both as protagonists and mentors for young artists. Furthermore, the festival is also a space of expression for the creators of transdisciplinary formats, which encourages creative experiments and highlights the visual and sound arts”, declares Andreea Capitanescu, the artistic director of the eXplore festival.

The Swedish choreographer Mårten Spångberg opens the series of events at eXplore Festival #13 on October 6, at WASP Working Art Space and Production. This “bad boy” of contemporary dance, as The Guardian called him, comes to Romania with a performance that focuses on digital technology and invites to meditation in the company of objects. Mårten is also co-ordinating the first laboratory of the RAW Practices in Performance Art program organized by WASP Studios, with the participation of Romanian artists and whose works will be presented on October 7.

The festival continues with the performance of the French artist Latifa Laabissi, “Self portrait camouflage” on Monday, October 8, at the Bucharest National Theater, Atelier Hall, after its presentation last year at the New York Museum of Modern Art (MoMA), within a series of live performances. The show is presented in Romania in partnership with the French Institute in Bucharest, with the support of Teatroskop, a program initiated by the Ministry of Europe and the Foreign Affairs of France.

The “Film – curatorial project” exhibition is introduced to the public by the curator Matei Bejenaru and the participating artists – Irina Botea, Jon Dean, Ciprian Ciuclea, Diana Dulgheru, Lavinia German, Catalin Soreanu, Sorin Vreme – on October 13, while the „87 clouds will rain for you” sound installation, signed by Iosif Kiraly, promises to be a true sensory experience for those who will step into the WASP space.

On October 17, Wanda Mihuleac and Marilena Preda Sanc invite the audience to a dialogue conference at the National Museum of Romanian Literature on the existence of alternative art and events held in unconventional spaces in Romania before ’89, compared to France between 1989 and 2018.

The evening of October 19 is dedicated to the performance “The Dream is the Dreamer” in the performance of Portuguese artist Catarina Miranda, at WASP Working Art Space and Production, as well as to dance films produced last year by WASP Studios and 4Culture Association within GROWASP 2017 cultural program, in partnership with the Department of Photography, Video and Image Processing of “George Enescu” National University of Arts in Iasi.

The 13th edition also includes at WASP Working Art Space and Production the projection of “XXXXXXX” video, created by Ivana Müller within the “Love Letters to a (Post-)Europe” project and presented in 2015 in Athens in the context of a rapidly changing Europe and as an expression of solidarity with Greece at that time.

eXplore festival #13 closes on October 20, 2018, with the play “We are still watching”, signed by Ivana Müller. Based on an increased degree of interactivity, the author launches to the participants the challenge to become the protagonists of the work themselves and to experience theatrical art in a much more personal manner through direct engagement. Known to the Romanian public due to her presence at the eXplore festival in Bucharest with the show “While We Were Holding It Together”, Ivana Müller is one of the most powerful voices on the European stage of contemporary dance and performance.

Tickets: www.mystage.ro and at the TNB ticket office

Free entrance, within the limit of available seats (20 persons)

Details and reservations at the email address: contact@waspmagazine.com

87 Clouds Will Rain For You

The Dream is the Dreamer

We are Still Watching

The project does not necessarily represent the position of the National Cultural Fund Administration. AFCN is not responsible for the content of the project or the way the project results can be used. This is entirely the responsibility of the beneficiary of the funding.

Partners: The French Institute in Bucharest, the Bucharest City Hall through the National Museum of Romanian Literature, the Contemporary Photography Center in Iasi