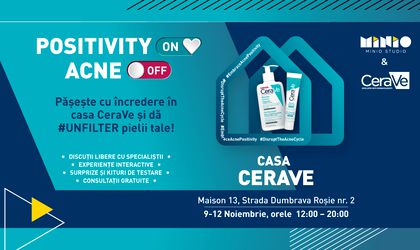 Minio Studio and the CeraVe brand, part of L’Oreal Romania, once again joined forces to develop a powerful campaign that ran both online and offline for the launch of CeraVe’s new range of acne-prone products.

The campaign was primarily targeted at young people experiencing acne-prone skin in Generation Z (mainly aged 18-25). To get their attention, Minio Studio choosed an interactive approach, bringing them together with leading experts (dermatologists, nutritionists and psychologists) as relevant as possible to discuss the challenges that arise in the fight against acne. As part of the launch campaign, a series of activations took place to bring the new range to the public’s attention: a dedicated CeraVe community event in the Bebe Tei store, an information and sampling campaign in dormitories and universities, accompanied by free dermatological skin assessments for students, culminating in a large launch event held over 4 days – CeraVe House.

“The relationship with the CeraVe client is a special one and whenever we have the opportunity to think of a new concept, a new exciting activation, the whole team is set on big things. This time, the enthusiasm was even greater, because we are talking about generation Z, which is not an easy target to impress, that’s why we thought of a series of activations to attract their attention, to respond to a problem that many of them face and to give them a boost of confidence”, said Ioana Mucenic, CEO Minio Studio.

Minio Studio and CeraVe organised a series of activations: free dermatological consultations were held at the University of Architecture and Urbanism Ion Mincu and Politehnica Bucharest, which were open to all students with acne-prone skin. By simply filling in a registration form, young people could schedule a consultation and had the opportunity to discuss freely with the doctor present about their skin and its care. Consultations were promoted both online on student groups and on CeraVe social media, and offline on the college notice board. Over 100 students were assessed by CeraVe specialists and received mini product kits from the new range for testing.

In parallel, an extensive information and product testing campaign was carried out on Regie, Leu, Agronomie and Belvedere student campuses. In addition to the test kits, the 20.000 students were also offered invitations to the CeraVe House event. During the 7-day activation, the promoter team received positive feedback from the students, many of whom expressed a desire to take part in similar future actions and purchase the products after testing. The offline outreach to young people also proved to be effective in that a large proportion of them subsequently visited the CeraVe House.

The Maison 13 location became, from 9-12 November, the CeraVe House – an interactive experience with 5 thematic zones that participants could discover in a strategic journey: understand, learn, discover, boost & share. The event was, in fact, the largest offline action ever carried out by CeraVe in Romania.

After entering the universe of the CeraVe House, participants discovered the Understand area, welcomed by the event hosts and encouraged to scan the QR code to view the map of the journey ahead. Once in the Learn zone, the learning experience about acneic skin and its management began, presented in a variety of ways: educational videos made in collaboration with dermatologists specially made for the event, which could be scanned via a QR code; free discussions with dermatologists, nutritionists and psychologists, as well as free dermatological skin assessments. In the Discover area attendees received, through interaction with an Advent Wall, test kits for the new anti-blemish range, stickers with positive messages and information brochures about the new CeraVe formulas.

Because an important component of the event was generating content on Social Media, the Boost area featured several instagrammable spaces, photobooths and interactive experiences designed to remind visitors that trust starts from within and builds gradually. Some of the most photographed activations were the lightbox, which projected encouraging messages on the walls of the room, and the audio installation, where a touching message from ‘your skin’ could be heard on the receiver. At the end, in the Share area, participants could give feedback in an interactive way: either with a white ball for the activation they liked best, or with a message or drawing that could be made directly on the oversized product.

The stakes were high – visitors who stepped into the CeraVe House could win the CeraVe routine for an entire year by simply posting a photo of the House online. Following the contest, 10 winners were drawn who will continue to enjoy CeraVe’s anti-blemish range of products throughout 2023.

“The CeraVe brand is one that is loved in an organic way by Gen Z, if you will. And bringing the CeraVe community together is something we’re really excited about. We felt the need, this time, not only to impress them, but also to reward their loyalty: that’s why we created each activation with an interactive component and made sure that the participants of the CeraVe House wouldn’t leave without taking something with them: products (in various forms), information and experience“, added Teodora Mihale, Account Manager at Minio Studio.

The CeraVe House ran for 72 hours and hosted around 600 participants, over 100 free dermatology consultations and offered 16 hours of free talks with specialists.

The CeraVe event was communicated digitally and reached a paid reach of 225K, 4M views and 655K video views. Collaboration with influencers and partnership with dermatologists provided support and extra visibility to the event, generating 3.5M reach.

Through this event, CeraVe created strong buzz around the launch of the anti-blemish range and brought dermatological expertise closer to direct users through activations specifically designed for Generation Z.