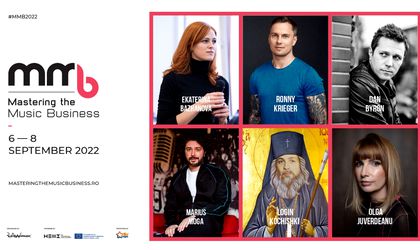 The seventh edition of the MMB conference, the leading music conference in Romania, will take place in physical format in Bucharest, between September 6 and 8.

Among the first confirmed speakers are Marius Moga, Dan Byron, Olga Juverdeanu, and many others to be announced.

Dozens of Romanian and international speakers from the music industry will participate this year in MMB, the place where they will discuss the most interesting musical topics and will meet with independent artists, but also with professionals in the field. Last year, among the most appreciated speakers were Steve Vai, the famous American guitarist and multiple Grammy winner, but also Jordan Rudess, multi-instrumentalist of the American progressive metal band Dream Theater.

What speakers will you meet at MMB 2022?

Anca Lupeș, the founder of the MMB conference, says that “we have big plans for this year’s edition. Maybe it’s because it’s the seventh one and now we can really talk about tradition, but at the same time we have the desire to be the best, to help the music industry as much as possible and to be happy that together we can meet professionals from all over the world. Because MMB is the place where anyone can shake hands with the speakers, drink coffee together during the lunch break or ask them the most awkward questions.”

Conference tickets are now on sale on ove.ro and iabilet.ro.