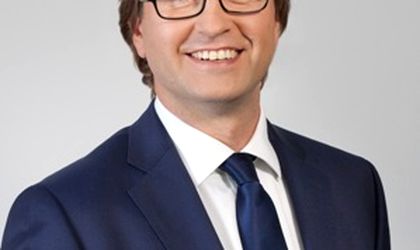 Lukasz Olszewski, Head of Business Development CEE, Turkey and Greece at S&P Global Ratings, will be a speaker at the fifth edition of the Foreign Investors Summit, organized by Business Review between October 30 and November 1, at the Sheraton Hotel in Bucharest.

He will be part of the first panel of the Summit, taking place on October 30, called “Harnessing Romania’s growth future” – more details available on the event page.

Lukasz is Head of Business Development in Central & Eastern Europe, Turkey and Greece with primary responsibility for generating new interactive rating relationships and client management with entities in the Corporate, Financial Institutions, Insurance, International Public Finance, and Structured Finance sectors across the region. Lukasz joined S&P Global Ratings in May 2015 and
is based in the Warsaw Branch, the firm’s hub for Central and Eastern Europe. In addition, Lukasz also manages relationships with the largest existing S&P clients in the region.

Lukasz gained professional experience working in London, Warsaw and San Francisco. Before joining S&P Global Ratings, Lukasz was a Director in the Investment Banking departments at Citibank, Haitong and PKO BP. While with Citibank Handlowy he played integral roles in re-establishing Investment Banking Department and operations in Warsaw. Prior to moving to Poland he
spent 6 years in London, working for Citibank and Standard Bank in Corporate Finance and Debt Capital Markets teams covering CEEMEA region. He was actively involved in some of the landmark M&A, ECM and DCM transactions across the region.