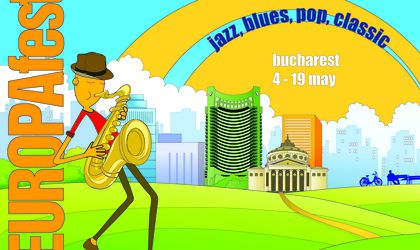 Meanwhile, the competitive section of the festival, held under the banner 100% jazz & more, is reaching its halfway point. Running between 12 and 19 May in Sala Studio of the Odeon Theater, the Bucharest International Jazz Competition is being contested by troupes from over 20 countries – the USA, Poland, Switzerland, Slovenia, the UK, Germany, the Netherlands, Israel, Armenia, Australia, Brazil, France, Ireland, Italy, Japan, Colombia, Russia, Moldova, Norway, Romania, Spain, Sweden and Hungary.

Musicians performing in the competition have previously graced international events such as the Montreux Jazz Festival, Red Sea International Jazz Festival and Lionel Hampton Jazz Festival USA. Music fans can enjoy fado, blues, Balkan rhythms, African-American and Japanese sounds as part of the contest. Tickets are on sale at the theater, at RON 26.50 per day (RON 15.90 for students).

In the audience each night making notes on the contenders is the jury president, British pianist Wayne Brown, also artistic director of the Bucharest International Jazz Competition. He is joined on the jury by German conductor Emil-Silviu Ciobota, Bulgarian Svetoslav Nikolov of JazzFM Radio and Romanian musicologist Carmen Stoianov, dean of Spiru Haret University’s Music Faculty. One of the competition rules is that each group is obliged to play their own version of American jazz tenor saxophonist Sonny Rollin’s St Thomas as part of their set list.

The Bucharest International Jazz Competition has earned a reputation as a prestigious event in South-East Europe and was described by BBC as one of the top three jazz contests in Europe. Brown said, “I love the spirit of the event and I feel as at home in Bucharest as I do in London.”

Recent festival highlights have also included a less formal musical evening, in which various performers participating in the festival joined together for a lively jam session. The overall event continues until 19 May, when it will close with the EUROPAfest Gala, at which the competition winners will be announced and perform live.

Besides the jazz, blues, classical and pop concerts, jam sessions and jazz contest, the 16-day event includes workshops, a young violinists’ competition, due to reach its conclusion this weekend, and shows in unconventional spaces. Overall, more than 300 participants from 45 countries will perform at the festival, now on its 19th run. Since 2005, the event has been held under the high patronage of Princess Margarita and Prince Radu. More information is available at www.facebook.com/EUROPAfest.Bucharest.