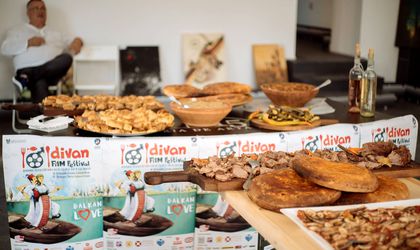 The third day of the Divan Film Festival is that particular moment when Mircea Dinescu brings to Craiova some of the specialties of Cetate Harbour, the magic place where Balkan food meets Balkan spirit and results a festive meal where (almost) everyone is invited.

You may wonder what’s with this Dinescu’s food. Well, firstly, is about the old Balkan recipes, then about the bio-eco vegetables and all the other goodies grown on these fields, the wonderful local women who are helping him in the kitchen and last but not least, the wine, labeled as Vinul lui Dinescu.

„The story begins with a hill covered with grapevines, above which the sun strolls hand-in-hand with the breeze of the Danube, and ends with the testimonial of a friend who, after drinking two glasses in the evening, woke up the next morning feeling smarter and more handsome,” says Mircea Dinescu in a description of the place where these Balkan goods are coming from.

But how was the preview of what will happen at Cetate Harbour in terms of Balkan food?

Don’t worry. If you can’t make it to Divan Film Festival, you can taste some of the Balkan goodies at Lacrimi si Sfinti and buy some local products like zacusca, wine or jams from Barza Viezure Manz shop, both placed in Bucharest’s Old City Centre.