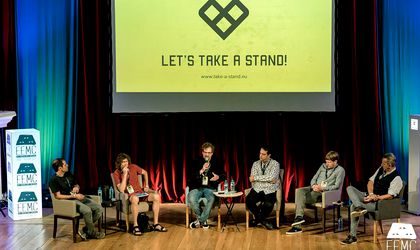 On its second edition now, the East European Music Conference (EEMC), which takes place within Artmania festival during daytime, gathered once again top representatives from the European live music industry for a series of panels: the music industry in a troubled world, future of music festivals – greener, smarter, more sustainable and the new utopia, state authorities and the event industry, among others.

This edition of the EEMC brought together experts, authorities, local and regional promoters; editors and correspondents from leading international publications such as IQ Magazine, Canadian Music Week and Global Publicitys; international tax experts; and the main players from the European festivals market, to network and encourage an exchange of ideas.

Most of the discussions having future of music festival topics tried to answer the same question: how do festivals reshape and rebrand destinations. On one hand, everyone wants more festival-goers and kind of a festival tourism. On the other hand, we should keep an eye wide opened for the sustainability of the festival – going green, being smarter, prevent and preserve.

Currently the best example Romania has on this sustainability implementation in a festival is Electric Castle. Andi Vanca, head of communication at Electric Castle, explained once again the zero waste mission they have.

During last year’s edition, they recycled 66 percent of the festival’s trash, which is pretty impressive. For the same festival, a huge campaign was held for not using straws anymore, but biodegradable and 100 percent compostable straws were available at the bars. Also, they had 40 bikers who travelled for more than 250 km to get to the Banffy Castle to raise awareness about the benefits of cycling. They promote the idea that cycling should be considered a national objective, being a zero carbon footprint mean of transportation.

The other Romanian example came from Laura Coroianu, Awake Festival, who explained the audience that they re-utilise the decors of the festival from one edition to another.

Probably one of the best initiatives currently taking place in Europe is Take a Stand, a movement encouraging social cohesion in our society, promoting awareness and tolerance for all cultures, genders, races, religions, sexual orientations, colors and origins in order to motivate people to participate in politics and social activities, speaking up for peaceful dialogue, humanism, tolerance and mutual understanding, to make the world a better place for every single individual and for all of us.

The entire panel applauded the #farapenali initiative where more and more artists – probably most vocal one being Tudor Chirila from Vama band, are trying to raise the signatures for changing the Constitution and not allow convicted people to run for public office. The #FaraPenali initiative was launched by Uniunea Salvati Romania (USR), one of the opposition parties in the Parliament.