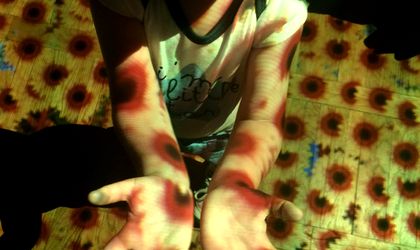 “MOVING van GOGH” is the name of the exhibition that is on display until October 16, 2016, at Cantacuzino Castle, Busteni, Brasov county. Besides the hologram of the painter Vincent van Gogh, world famous paintings animated and 300 moving sunflowers, you can find there the stars, the sky and the enigmatic squirrels from the “Starry Night” by the Dutch painter Vincent van Gogh and the famous sunflowers from his compositions, which are brought to life at the Cantacuzino Castle.

The Cantacuzino Castle Art Gallery presents its fourth major exhibition, “MOVING van Gogh”, which includes animations, projections, audio – video installations and a hologram of the great Dutch painter, all in a contemporary project which is going to transpose the visitors into the boundaries between real and imaginary.

Three interactive halls, over 300 animated sunflowers, which will dance on the rhythm of the visitors’ footsteps and a hologram of van Gogh are just some of the central elements that can be found in the exhibition “MOVING van Gogh”.

“In the fourth exhibition of the Cantacuzino Castle Art Gallery visitors will be able to enjoy an incredible show, a bold project that is bringing for the first time in Romania the fantastic world of van Gogh. We designed an innovative inauguration, with a pre-opening, more exactly started the 29th of June, for 2 weeks, where the art lovers are able to enjoy a unique collection of 100 intaglio printings with drawings by the Dutch painter, made in Holland, in 1892″, said Kurt Neuschitzer , CEO of Zamora Estate, the company that owns the Cantacuzino Castle estate.

In addition to the high-tech artistic elements, the exhibition will keep until its end 40 of the most expressive and dynamic heliogravures after Vincent van Gogh’s drawings.

For an alternative experience, the Cantacuzino Castle Art Gallery has created special areas where, through multiple gadgets, visitors can paint, play and also can recreate the heliogravures and other famous works by the artist.

Another attractive element of the exhibition is the VAN GOGH – Thek, a space dedicated to documentary films about the life and work of the Dutch painter Vincent van Gogh.

Built between 1901 and 1911 at the behest of Prince Cantacuzino, and designed by architect Grigore Cerchez, the castle stands out for its large, imposing stone and brick building. The Cantacuzino compound in Busteni was nationalized in 1948, and used as hospital for Romanian military leaders of the time, and it was not until 2004 that it was given back to the Cantacuzino family. In 2008, the castle was purchased by a group of foreign investors, who decided to work to get it on the tourist map nearly 100 years after its inauguration. Currently, businessman Kurt Neuschitzer is in charge of the edifice.