Divan Film Festival: Give Romanians a taraf to start buzzing 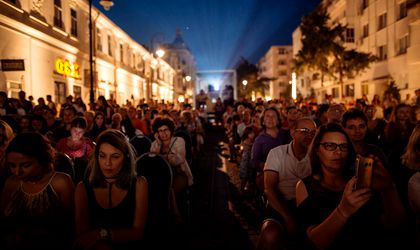 There are a lot of sayings and stories about the Balkan spirit. It’s the joy, the mood, the music, the food, the fun and definitely the ongoing party we are living on as people of Balkans. And then is an unique Romanian festival which celebrates all these and much more: Divan Film Festival.

Last night, in the beautiful facelifted Craiova Old City Centre, the eight edition of Divan Film Festival has started with a Balkan joy that represents this part of the world. Those who animated the spirits were Mahala Rai Banda, one of the best known Romanian tarafs. Craiova has danced and sang with them and afterwards they enjoyed Bourek comedy, a movie set against the backdrop of economic crises and bad news, an extravagant international cast of characters who meet, fight, and fall in love, while hiding from the end of the world and other calamities on the tiny Greek island of Khronos. Each one of them discovers something or someone that gives new meaning to their lives, helped in no small part by the food they share, especially the Mediterranean pastry Bourek.

At first, I was surprised by the fact that everyone was listening the band placed on their seats. According to the Balkan spirit, when having a live taraf singing for you, you can’t sit. But then, after the shyness disappeared we started to dance. You probably don’t know, but one of the traditional  Balkan wedding element is/was a great show-off on the wedding day, having taraf singing for you and starting the party literally in the street, in front of the house of the bride, blocking the traffic. Nowadays this tradition is only kept by the gypsy people so it’s kind of difficult to attend to such performance. Thus being said, last night in Craiova Old City Centre, Mahala Rai Banda made me feel once again an attendee of a traditional Romanian wedding, as I remembered from my childhood. Thank you, gypsy boys!

Shaped in the Gypsy ghettos (Mahala) around Bucharest, Mahala Rai Banda combines a surprising array of trends and styles. The taraf is well-known internationally, while the band were on stages across the USA and Europe their fierce Gypsy funk. The 11-piece brass band’s blend of hard Balkan brass with minor key violin & accordion melodies has made them as a force to be reckoned with.

A very brief history of gypsy music should include the fact that it is rooted in tradition but with hints of dub and soul, Turkish and Arabic assimilated into their roaring dance mix. “When Mahala Rai Banda hit the stage ancient Gypsy campfire tunes blend with the raucous din of Balkan Mafia clubs. Mahala Rai Banda’s unique Eastern groove evolved in the mahalas (Gypsy ghettoes) on the outskirts of Bucharest, Romania’s ruined capital city. In these mahalas musicians from the southern village of Clejani (home to legendary Gypsy orchestra Taraf De Haidouks) jammed with brass musicians from the Moldavian village of Zece Prajine (home to Balkan brass blasters Fanfare Ciocarlia). Quickly, they became the hottest weddings and parties band in Bucharest. As Romanian Gypsies traveled into Western Europe the band’s legend spread”, is written on the band’s official website. Moreover, Mahala Rai Banda’s fame existed on tapes passed around Balkan music scenes in Berlin and Brussels, Barcelona and Vienna. These tapes captured raucous jam sessions that lasted deep into the Transylvanian night and showcased a fierce Gypsy folk-funk taking shape.