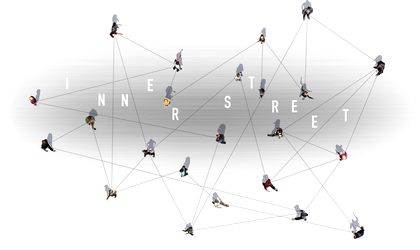 As you may know, in recent years Bucharest has become a more cosmopolitan city, embracing the arts and culture and taking its creative side to a new level. Street art is widening its borders, as murals painted by artists are incorporated into clubs’ terraces, in an unprecedented collaboration between artists and brands.

This month, TAG YOUR IDEAS project facilitates the meeting with the artist Catalin Burcea, who, on the alternative scene of Control, open daily and almost non-stop, proposes a contradiction of two distinctive realities, having in common the idea of a city’s main street.

“The social `matrix` and the relation of accommodation in a city becomes the reason of our time. The relation between resident and public sphere, as a co-habitation, ease, initiation and conservation of a culture of a very determined community show the possibility to interfere and re-improvement of a public sphere/space.” Curator Eugen Rădescu describes Cătălin’s installation for TAG YOUR IDEAS.

TAG YOUR IDEAS is a new visual communication platform for the city, completing the need to support an artistic manifestation that embraces our existence. Every day, hundreds of people come to Control Club for the promise we all respect: THE ALTERNATIVE. This is why, every month, a new artist will redesign the space of Control Club’s inner courtyard, sustaining a speech which has been already reflected by other artists about how public space can be exploited within the city, at the intersection between public and private. The eclectic conversation we create with this project completes an urban cultural dialogue that Control Club has started 11 years ago.

In 1990, American artist Ed Ruscha performed the work entitled Main Street; which is part of the iconography of American life. Ruscha’s Main Street antagonises two distinct realities. On the one hand, the nostalgia of a Main Street that belongs to the past, the glamorous place where all the important events happen, where people are happy together and they are doing things of all kinds. On the other hand, the modern times when Main Street meets and flirts with Wall Street, a symbol of the interests of large national corporations, where American innocence and values ​​are overshadowed by greed and technology.

Ed Ruscha juxtaposes these two entities. Ruscha has an ideal representation of the street, but the present and the future especially seem to depart from this formula. Before actually being on the street, the man creates his important routes. He imagines them and sometimes even accesses them with the help of new technologies that seem to satisfy him more and more. The virtual world is becoming more present and what we imagine becomes more concrete than reality itself.

INNER STREET still identifies a layer vis-à-vis Ruscha’s observations, that the real street is becoming less frequented while the ideal street, the one imagined by the individual, is more important than ever.

FREE NOW sets the goal to improve the proportion of women in all...