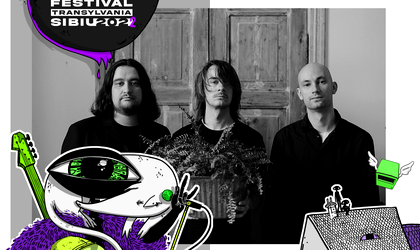 Stoned Jesus was founded in Kyiv in 2009 by frontman Igor Sydorenko and, over time, has released four albums – well received by both the public and critics and the international music industry. Recently, Stoned Jesus signed with the American label Season of Mist and released their new single Porcelain. The band are gearing up to release their fifth album, and the first under the new imprint.

With almost 500 live performances throughout their history, the band has not only toured Europe and South America (twice), but also shared the stages of major festivals with bands such as Rammstein, The Prodigy, Ghost, Unkle, Slayer, Korn, The Offspring, Gojira, Dream Theater, Bring Me The Horizon and even the legendary Black Sabbath. The trio was chosen as the support band by the iconic band Deep Purple for their 2018 concert in Kyiv, which was attended by 10,000 rock and metal fans.

Stoned Jesus’ participation in the ARTmania festival comes as the result of the launch of the ARTery project (artery.community), founded by the festival organizers, in partnership with Music Export Ukraine and the Pohoda Festival (Slovakia) – a pan-European platform designed to help Ukrainian creatives and musicians find jobs in Europe. ARTery is a creative movement whose main purpose is to support artists and professionals in the creative sectors who have been forced to leave war zones and to support them in their efforts to continue their lives with dignity in their host countries.

Stoned Jesus completes the ARTmania Festival line-up, and will be sharing the stage with (in alphabetical order): Cult of Luna, Leprous, Meshuggah, Mercyful Fate, My Dying Bride, Transatlantic, Testament, The Pineapple Thief, The Vintage Caravan and Romanian bands Bucovina, Dordeduh and Taine.

The 15th edition of the ARTmania Festival in Sibiu takes place between July 22-24, 2022, and the subscriptions are already available on artmaniafestival.ro, ambilet.ro, eventim.ro, entertix.ro and iabilet.ro. All season tickets purchased for the ARTmania festival in the period 2019-2021 remain valid for the 2022 edition of this event, without additional cost changes.

ARTmania Festival, the first Romanian festival that has brought on the local market the concept of ​​combining the art with entertainment, is a platform dedicated to promoting all forms of artistic expression inspired by rock culture.

ARTmania, the longest-lasting rock festival in Romania, has consolidated itself with each edition as a major regional promoter of contemporary music. However, ARTmania Festival does not simply refer to shows of famous international and local bands. Music is the main component from which everything emerged, but it is only a part of the experience the festival was designed to offer to Romanian and foreign art lovers.

Since the very beginning, it has been designed as a cultural platform meant to offer the public various events and ways to experience different forms of artistic expression, such as concerts, exhibitions, book launches or film screenings. This common meeting place of artists with the public at the level of sound, colors, images or letters, hosted by the Square and the medieval fortress, creates the space of fairy tale and magic which is essentially comprised in the spirit of the festival.

ARTmania is constantly exploring new directions, building on the experience of previous editions, when a number of important artists and bands went on stage, international names like: Steven Wilson, Peter Hammill, Serj Tankian, Devin Townsend, Die Toten Hosen, Nightwish, Within Temptation, HIM, Tarja Turunen, The Gathering, The Sisters of Mercy, Anathema, Apocalyptica, Lacuna Coil, Helloween, Lacrimosa, Poets of the Fall or Deine Lakaien among many others.