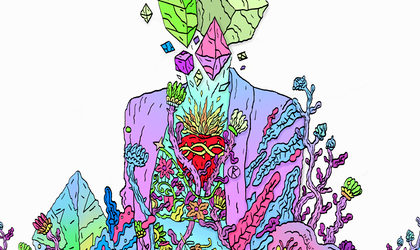 Tuesday, September 22, on the Expirat Halele Carol terrace in Bucharest, during Backyard Acoustic Season, the band Rockabella launches the new single “Naluca” and challenges the participants to an experiment of collective art.

The new song “Naluca” is about the hallucinaut need of escaping and of feeling alive again, a desire that in a shape or another we have all felt at least once in life. “Let’s color together Naluca and show to the world that the art gives us a voice, cures us and gets us together!” says the press release.

A huge page waiting to be colored will be present in the club, inspired by the artwork of the song and at the entrance each one of the participants will receive a marker with which they will be able to color a part of the painting, draw or write, anything he /she imagines. Sky’s the limit!

At the end of the concert there will be a collective art work, a collage of fragments from each one’s imagination and creativity, a painting created together. Who wants to take home the work will be able to take part in a secret auction and the money will be donated or redirected towards the Leaders foundation.

The biding period is of one week starting the event’s evening and on September 30 it will be announced the winner.

Rockabella is a band that combines the art-rock, alternative and indie-pop influences with unexpected insertions, in story like songs about moments that transform us.