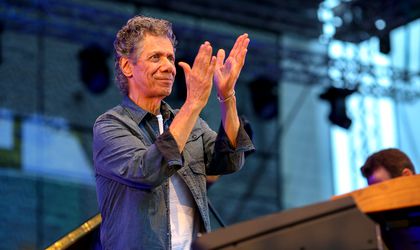 I could resume the entire live happening that took place in Timisoara’s Victoriei Square on June 30 as LEGENDARY and finish up the article. But it was more than that: it was a party with thousands and thousands of people who were in the city’s square to meet and enjoy The Chick Corea Elektric Band feat. Frank Gambale, Eric Marienthal, John Patitucci and Dave Weckl. As you may know, the band has reunited in 2016, for Chick Corea’s 75th anniversary, and it has been celebrating on the big stages of the world ever since, being for the first time in Romania. Thank you, JazzTM!

As you may know, The Chick Corea Elektric Band reunites a multitude of styles, jazz, rock, latino and funk, presenting to the public a futuristic sound, considered even now to be one of the foundation stones of fusion jazz.

The quintet is formed of Chick Corea on piano, Dave Weckl on drums, John Patitucci on bass, Eric Marienthal on saxophone and Frank Gambale on guitar.

Why legendary? Well, we are not the only ones who believes The Chick Corea Elektric Band is absolutely incredible. The leading artist Chick Corea won 22 Grammy awards (out of no less than 63 nominations), another three Latin Grammy awards (more than any other artist ever nominated for Best Instrumental Album), included in the DownBeat Hall of Fame and Jazz master in 2006 and who has achieved the status of living legend, after five decades of never before seen creativity and a staggering artistic capacity. Currently, he is the 4th most awarded artist in the history of the Grammy awards.

According to the organisers of JazzTM, Armando Anthony ”Chick” Corea is a pianist and composer of jazz and fusion, a lot of his compositions considered “standards” of jazz. In the 1960s, he was a member of the Miles Davis band, contributing decisively to the birth of what we call now the electric jazz fusion movement. Corea has been described as one of the biggest voices of world jazz, which came out after the age of John Coltrane, and recognised as a musical visionary, not only of jazz music. The 4th most awarded artist in the history of the Grammy awards. Chick Corea is still exploring musical genres, at his 76 years of age, and is actively involved in the promotion and collection of funds for social causes.

What’s the secret to be such a great artist, a living legend?

Chick Corea explained in the press conference before the concert that he doesn’t know, while he is not a guru. “The act of composition is like breathing, is like living, it goes on, it goes on. The seed is the imagination, really,” answered the legendary artist.

Do you still happen to get surprised by your instrument during concert?

Last but not least, I am particularly amazed by the Timisoara public. For the entire concert, those thousands of people who were sitting in the Victoriei Square, were actually enjoying the show. Very few phones in the air were spotted, unlike the other live concerts I’ve attended in the past years. People of Timisoara were there for experiencing the music, not for capturing bad videos of what’s on stage. Chapeau, Timisoara, I’m mesmerised!