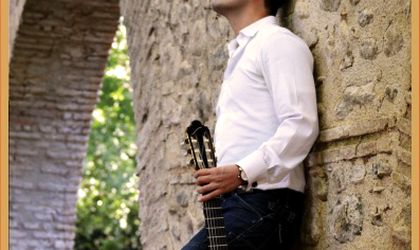 Guitar player David Martinez will hold a concert this Sunday, October 13, at the Carol I Central University Library in Bucharest. The concert is organized by the Cervantes Institute in Bucharest, in partnership with the Carol I Central University Library, and with the support of the Spain Embassy in Romania and of the Club of Sponsors of the Cervantes Institute.

The program of the event is available here.

Born in 1975, in Granda, Spanish guitarist, David Martinez began his musical studies at seven with his father, while singing as soloist of the Granada Conservatory Choir. He later studied with his uncle, professor Carmelo Martinez, graduating in 1993 from the Superior Conservatory of Granada with the silver medal of the Young Interpreters of the Musical Youth of Granada. He was then accepted to the class of the Mozarteum of Salzburg, Austria, with Joaquin Clerch and Eliot Fisk as professors.