FOREVER HIT, the greatest open air disco in the world, set for September 18 at National Arena in Bucharest 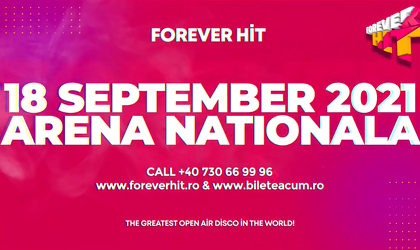 Following the success of DISKOteka – the music festival of the ’80s &’ 90s in Timisoara, the founders of the event decided to organize a similar show in Bucharest. Thus, on September 18 at National Arena, the first edition of the largest open-air disco in the world will take place. FOREVER HIT will be a festive show, with artistic performances in a gala atmosphere, with the aim of highlighting some extremely valuable artists and awarding them for their entire activity and for their contribution to the world music industry and heritage.

Access cards for Forever Hit have gone on sale at foreverhit.ro or bileteacum.ro/forever-hit-2021. The event will also broadcast via online streaming through the platform Streamerse, one subscription costing EUR 10.

Representatives of the “World Records Book” will come to Bucharest for the legendary Londonbeat singer, Jimmy Helms, who will celebrate his 80th birthday at the National Arena, where he is set to become the “Oldest activemember of a pop boygroup”.

Helms has been singing for most of his life and made history with “I’ve Been Thinking About You”, one of the most played songs of the 90s. Representatives of The Guinness World Records have announced their presence in Bucharest, at the Forever Hit Festival (18 September), for the show of the veteran American musician, who will take to the stage in the month he turns 80 years of age. The singer whose unmistakable voice has rocked discos and parties around the world, Jimmy Helms looks set to enter the world record books as “Oldest active member of a pop boygroup”.

It will be the most important recital ahead of the American-born artist’s birthday, who will turn the respectable age on September 27. Jimmy Helms will take to the stage with Charles Pierre, as well as Jimmy Chambers, who helped the Fine Young Cannibals supergroup also reach the top of the world music charts.

“Age is just a number. It’s not just youth that has all the virtues. The spirit of the music, the energy that the audience gives me makes me feel young all the time. I challenge you to come to the festival in Bucharest where Londonbeat will shake you up once again. I promise!” says Jimmy Helms.

Dr Alban: ” Intelligent music lovers have gone back to basic music. The fact that I will be playing at Forever Hit shows me that there are many intelligent people in Romania”

Perhaps the most important exponent of the Eurodance movement of the 90s, Dr. Alban still composes for himself and other artists affiliated to his label and he is not surprised that, in the public eye, all the old songs remain relevant. “I’m not surprised, that period of music retains a special flavour and music in vogue today has gone in experimental directions. Intelligent people have returned to the music that gave them beautiful moods and memories. And the fact that I’m going to play in the biggest stadium in Romania shows me that there are many intelligent people in your country.”