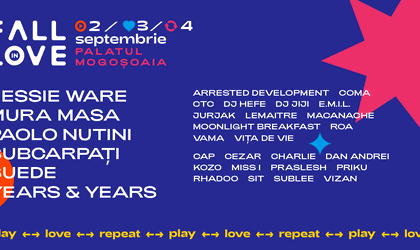 Between 2nd and 4th of September, the domain around the Mogoşoaia Palace will host the second edition of Fall in Love music festival, the event where you fall in love with life, nature and some of the most appreciated artists in the world today, both international and Romanian – 3 stages, different music genres, from funk to pop, and hip-hop to electro, contemporary art installations, nature at the beginning of Fall and plenty of dancing.

JESSIE WARE (UK) is one of the UK’s most beloved artists; her debut album, Devotion (2012), ranked no. 5 on the UK Albums Chart, followed by Tough Love (2014), that reached number  9. Three years later, she released her third album, Glasshouse (2017). Her biggest success so far was the studio album What’s your pleasure (2020), that reached top 3 in the UK.

MURA MASA (GG), the young musician and producer from Guernsey, performs for the first time on the stage in this part of the world. At the age of 26, he has already made two Grammy nominations, and his most famous song, Lovesick, has propelled him to the top of the charts in the US and UK.

PAOLO NUTINI (UK) is just releasing his fourth studio album, Last Night in the Bittersweet. His songs in funk, reggae and soul rhythms will be heard live for the first time in Romania, on the stage of the Fall in Love festival, and his audience will surely fall in love with his renowned hits These Streets or Jenny Don’t Be Hasty, in the nature surrounding the Mogoşoaia Palace.

SUEDE (UK) are pioneers of the Britpop musical movement, alongside Oasis, Pulp and Blur, and one of the most acclaimed alternative rock bands in the UK, with the unmistakable Brett Anderson as the lead singer. Winners of numerous awards, from the Mercury Music Prize to the Godlike Genius Award (NME). This September, Suede are to release the long-awaited album Autofiction.

YEARS & YEARS (UK) brings together R&B, electro-pop, tribal influences and house elements. Their first studio album, Communion, was the best-selling debut album of 2015, ranking at the top of the UK Albums Chart. That same year, the band won the BBC Sound of 2015 award. Their music speaks of identity and humanity. In January this year, Years & Years have released their third studio album, Night Call, the first since Olly Alexander’s separation from former band members, Mikey Goldsworthy and Emre Türkmen.

ARRESTED DEVELOPMENT (USA) brings to the stage a unique representation of the eclectic and effervescent African rhythms, which contrasts with the audience’s expectations from the classical sounds of hip-hop culture. Their album, 3 Years, 5 Months and 2 Days in the Life of… enriched their record with two Grammy Awards, and two MTV Awards. Arrested Development set out to play an active role in changing the world for the better, and are doing just that from the greatest stages of the world, having already become legendary.