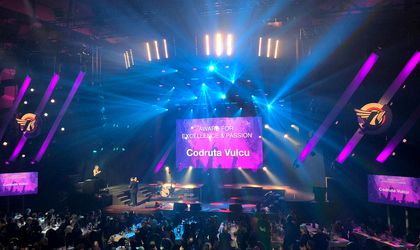 Codruta Vulcu is the winner of the category „The Award for Excellence and Passion” in the competition European Festival Awards, being the first Romanian person awarded during the prestigious festival’s 11 years of activity. The trophy was handed to her during the Awards ceremony that took place last evening in Groningen, Holland.

In the category „The Award for Excellence and Passion” are nominated professionals that contributed to the developing of the music industry at an international level, Codruta Vulcu having been nominated among other important names in the European music business, such as Alex Hardee, Barrie Marshall, Ben Challis, Daniel Fontana, Eric van Eerdenburg, Folkert Koopmans, Holger Jan Schmidt, Kim Bloem, Mikolaj Ziolkowski.

Codruta Vulcu is the director of the ARTmania festival, East European Music Conference and Blaj aLive Festival and AROC president (Asociatia Romana a Organizatorilor de Concerte si Evenimente Culturale – The Romanian Association of the Concerts and Cultural Events Organizers), having more than 16 years of experience in the music industry and a vast portfolio of events, amongst which is the organization, logistically and operationally, of the official ceremonies held last year by his Sanctity Papa Francisc on Blaj’s Liberty Field.

„I am extremely honored to receive this accolade from the jury of this important European festival. It’s a unique moment in the activity of a professional and I am even happier when this certification represents a recognition of the activity and the results obtained by a representative of the Romanian music industry, an industry that developed strongly in recent years. It was a remarkable evening for us as a country, two festivals from Romania winning as well in the categories they competed in. My sincere congratulations go to all the participants. I personally thank all my colleagues and collaborators for their amazing efforts, all the partners and the sponsors and, of course, all the artists and the public that were alongside us in the projects that we have been developing since 2006, until today.” Says Codruta Vulcu.

At the 2019 edition of the European Festival Awards, Codruta Vulcu received the trophy for the category „Best Small Festival” for ARTmania Sibiu (the festival that celebrates this year 15 years of activity). 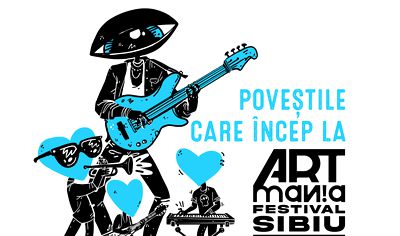 Read more about
ARTmania Festival, with the Hope and Homes for Children Foundation, the association “Pune mana pe chitara” and FEPRA prove that it is possible
read more

European Festival Awards represents the most important competition dedicated to the European music industry scene, launched in 2009 by Yourope (The European Festivals’ Association). It includes 15 categories, such as „Best New Festival”, „Best Indoor Festival”, „Best Small/ Medium-Sized/ Major Festival”, „Agent of the Year”, „Promoter of the Year”, „The Award for Excellence and Passion”, „The Green Operations Award” or „The Health & Safety Innovation Award” etc.

The awards ceremony of the European Festival Awards takes place each year during the Eurosonic Noorderslag period, an event that includes one of the most important international competition for this industry and one of the biggest showcase festivals in Europe.

ARTmania Festival, the first Romanian festival that developed in Romania the idea of blending art and entertainment represents a platform dedicated to promoting all the forms of artistic expressions inspired by the rock culture.

ARTmania has always been exploring new roads capitalizing the experience of the previous editions when on the festival’s stage played a series of important artists and bands, from Steven Wilson, Peter Hammill, Serj Tankian and Devin Townsend, to Die Toten Hosen, Nightwish, Within Temptation, HIM, Tarja Turunen, The Gathering, The Sisters of Mercy, Anathema, Apocalyptica, Lacuna Coil, Helloween, Lacrimosa, Poets of the Fall or Deine Lakaien, etc.