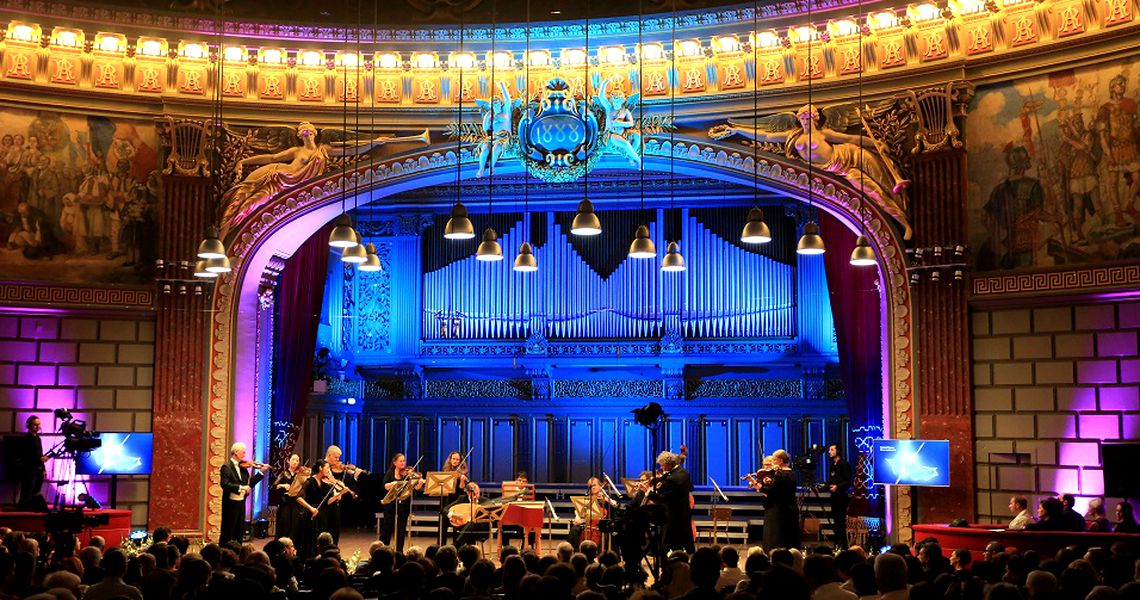 Now on its 24th edition, the George Enescu International Festival will take place between 31 August and 22 September. Bucharest’s concert halls will play host to over 2,500 of the most talented musicians from around the world, coming from 50 countries to give 84 concerts and recitals. “The world is harmony” is the tagline of this year’s event. BR tuned in to find out more.

On August 31, the George Enescu International Festival will open with an extraordinary concert by the Berliner Philharmoniker, currently considered the best orchestra in the world, who make good on their 2015 promise to return to the festival. The renowned orchestra, who first came after 15 years of negotiations, will play a composition by Enescu and perform with the Choir of the George Enescu Philharmonic, thus honoring one of the most important tenets of the festival: presenting Enescu’s work in top-quality interpretations, and building bridges for the collaboration of prestigious foreign orchestras and Romanian orchestras and artists.

The greatest orchestras of the world will perform at the event: the London Symphony Orchestra, with the renowned pianist Denis Matsuev, Orchestre National de France, with the legendary Evgeny Kissin at the piano, State Academic Symphony Orchestra of Russia, Staatskapelle Dresden, with the explosive Yuja Wang and soprano Kristine Opolais, Oslo Philharmonic Orchestra with Vasily Petrenko at the helm, Sankt Petersburg Symphony Orchestra with pianist Nelson Freire, as well as the prestigious Royal Concertgebouw Amsterdam, which will close the festival. Major ensembles like the Mahler Chamber Orchestra, Camerata Salzburg, Europa Galante, Orchestra of the Age of Enlightenment, Vienna Radio Orchestra with pianist Elisabeth Leonskaja and Academia Bizantina also grace the lineup.

Some of the most notable Romanian names due to take to the stage include the trio of conductors Horia Andreescu, Cristian Mandeal and Christian Badea. The biggest Romanian orchestras will perform, including the George Enescu Philharmonic Orchestra, the Radio Orchestra and Romanian Youth Orchestra, and philharmonic orchestras of Iași, Sibiu, Timișoara, Cluj, Bacău and Târgu Mureș.

Top conductor Ion Marin will once again appear, as will pianist Alexandra Dariescu, mezzosoprano Ruxandra Donose and Alexandra Silocea, a Romanian-born pianist based in Vienna who will perform under the conductor Vladimir Jurowski. Furthermore, Gabriel Bebeșelea, Tiberiu Soare, Vlad Vizireanu and Cristian Lupeș will conduct foreign orchestras. Laureates of the 2018 George Enescu International Competition will also give concerts.

Where the magic happens

Bucharest host venues – tickets and subscriptions for which have long sold out – include the Palace Hall at the Romanian Athenaeum, the Radio Hall, the Small Palace Hall, the George Enescu Hall at the National University of Music, and Excelsior Theatre. Concerts and recitals are grouped under six sections: “Great Orchestras of the World”, “By Midnight Concerts”, “Recitals and Chamber Music”, “21st Century Music”, “Mozart Week in Residence” and “International Composers’ Forum”.

The 2019 edition will be the largest and most expensive in the history of the event: some of the most renowned orchestras of the world and top artists, Romanians and foreigners alike, will play to audiences in Florence (Italy), Berlin and Dresden (Germany), Liège (Belgium), Toronto (Canada), and Chisinau (Moldova) essential compositions by Enescu or concerts dedicated to the great composer, at the same time as performances taking place in Bucharest, and alongside concerts scheduled in ten other cities around the country.

George Enescu’s Symphony No. 3 in C major, Op. 21, one of the most important works of the Romanian composer, his message to mankind at the end of the tragedy of World War I and “one of the most difficult symphonies for orchestra in the entire repertoire”, as conductor Vasily Petrenko calls it, will be performed in Florence and Berlin, on 8 and 22 September, respectively. It will be played by two world-class international orchestras: the Orchestra and Choir of the Maggio Musicale Fiorentino conducted by Fabio Luisi, and the Berlin Radio Symphony Orchestra under the baton of conductor Vladimir Jurowski.

In Dresden, renowned violinist Sarah Chang will perform Enescu on 8 September, while soprano Kristine Opolais will bring to the audience his Sept chansons de Clément Marot, Op. 15. Meanwhile in Liège conductor Gergely Mandaras will lead the Suite for Orchestra No. 2, Op. 20 on 2 September. In Chisinau, a concert dedicated to the festival will take place on 20 September, by the Serghei Lunchevici National Philharmonic Orchestra. The concert in Toronto will include the Toccata from Piano Suite Op. 10 and the Impromptu concertant, in a series entitled “Tribute to George Enescu”. On 21 and 22 September, violinist Alexandru Tomescu will perform in Montreal and Toronto The Ménétrier, as part of a larger program including works by Bach, Beethoven, Kriesler and Piazzolla.

Street, choral and instrumental shows will take place all over Bucharest – in parks, streets, traffic junctions and office buildings, courtesy of Cantus Mundi and the Comic Opera for Children, with support from CBRE. Street concerts will be given every Friday from 17.00-20.00; and Saturday and Sunday from 10.00-14.00. The office buildings program will take place daily from 12.00-14.00 (August 31 – September 23).

In the meantime, Interesting Times will offer guided tours of Bucharest. Musicians in the City follows in Enescu’s footsteps, featuring buildings and places frequented by Romanian musicians, while Bucharest Hidden Gems, aimed at both Romanian and foreign visitors, will present lesser known architectural jewels. Both tours will be available at weekends during the festival, with bookings at hello@interestingtimes.ro. Moreover, guided tours of Romanian artists’ studios will welcome an art savvy public. Information is available at www.ateliere.net.

Business Review will report from the Enescu Festival. Please check the website for more information.