A one, two, a one, two, three, four: EUROPAfest strikes up 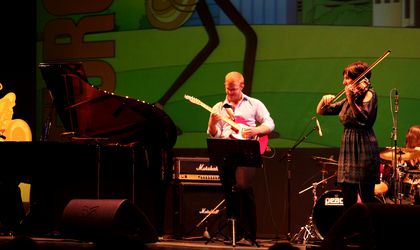 EUROPAfest got off to a lively start over the weekend with a series of concerts showcasing an eclectic range of music. The event began on 4 May in the elegant, old-school environs of Bucharest’s Odeon Theater, with a concert to celebrate Europe Days, organized in partnership with the local European Commission Representation. Spanish, Swedish, Australian, British and Romanian performers took to the stage for a gala concert that showcased jazz, blues and classical music. Guests of honor at the event included Prince Radu of Romania, who addressed the audience with a few words.

The shows continued over the weekend, when some of the same artists appeared again at the theater and then after hours at the nightclub El Comandante Primer, with audiences at both venues giving the performers an enthusiastic reception.

This year’s EUROPAfest, billed as Europe’s only festival that encompasses four music genres – jazz, blues, pop and classical – will resume on Thursday 10 May. Under the slogan “It’s all about live quality music!” it aims to promote a positive image of Romania.

Various events will be held throughout the festival, including jazz, blues and pop concerts, jam sessions and workshops, jazz and young violinists’ competitions, and shows in unconventional spaces. Overall, more than 300 participants from 45 countries will perform at the festival, now on its 19th run. Since 2005, the event has been held under the high patronage of Princess Margarita and Prince Radu. More information is available at www.facebook.com/EUROPAfest.Bucharest.