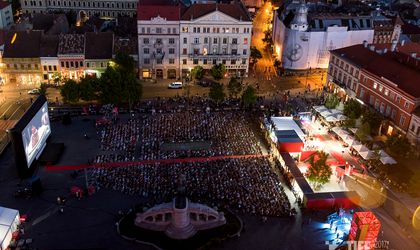 It’s that time of TIFF when the Romanian Days are happening. The most recent Romanian films will be screened in the 16th edition of the Transilvania International Film Festival (June 2-11) in Cluj. This year’s Romanian Days section (June 8-10) presents 27 titles — 13 features and 14 shorts — selected out of over 120 submissions. And there are some world premieres.

TIFF will present the world premiere of Iulia Rugină’s Breaking News, featuring Andi Vasluianu as a television journalist who survives an explosion in a manufacturing plant. Asked to do an in memoriam story, the character realizes that he knows next to nothing about his deceased colleague.

Following its world premiere in San Sebastian, the German Film and Television Academy Berlin production Prowl/ Vânătoare, directed by Alexandra Bălteanu, will have its Romanian premiere at TIFF. Corina Moise, Iulia Lumânare, and Iulia Ciochină play prostitutes in the course of a work day spent under a bridge just outside Bucharest.

Alexandru Solomon’s Tarzan’s Testicles/ Ouăle lui Tarzan a documentary shot in Abkhazia, where one of Stalin’s legendary initiatives — creating the perfect worker by engineering a hybrid ape man — is unpacked in an interesting combination of science fiction and non-fiction, will also be screened here.

The Trial/ Procesul, Claudiu Mitcu and Ileana Bîrsan’s documentary, is another world premiere which deals with the controversial case of Mihai Moldoveanu, a man sentenced to 25 years in jail for a crime he claims he did not commit.

Andrei Dăscălescu returns with Planeta Petrila, his new documentary about a recently closed mine seeking salvation through culture.

Photographer Cosmin Bumbuț makes his directorial debut alongside Elena Stancu with The Last Cauldron Maker/ Ultimul căldărar, a documentary about a Roma family forced to emigrate because they can no longer survive off of traditional crafts.

Gheorghe Preda’s Camera obscura delves into films made in cine-clubs during Communism, some of which are still subversive masterpieces. Șerban Georgescu’s Cabbage, Potatoes and Other Demons/ Varză, cartofi și alți demoni exposes the paradoxes which govern the lives of Romanian farmers with humor and a keen eye for the absurd.

Radu Jude will be present with two titles in this year’s Romanian Days. First, Dead Nation/ Țara moartă is a documentary which juxtaposes “fragments of parallel lives”: photographs from the vast Costică Acsinte collection against fragments of journals and archival sound chronicling the rise and fall of Fascism in Romania between 1937 and 1944. Cluj audiences will also have the opportunity to see Jude’s Scarred Hearts/ Inimi cicatrizate, a period feature film inspired by the work and life of Max Blecher.

Nominated for the European Film Awards, Adrian Silişteanu’s Written/Unwritten will be publicly screened in Romania for the first time at TIFF.  Andrei Tănase’s First Night has already been recognized internationally, winning the grand prize in the national competition at Dresden and a  place in the Venice Orizzonti section. And then three shorts are directed by actors: Conrad Mericoffer made When It’s Snowing Outside, while Andrei Huțuleac made Offstage and Valeriu Andriuță made Chers Amis. Finally, the French production Square, directed by Anca Damian, has a special screening in Cluj following its Cannes premiere in 2016.