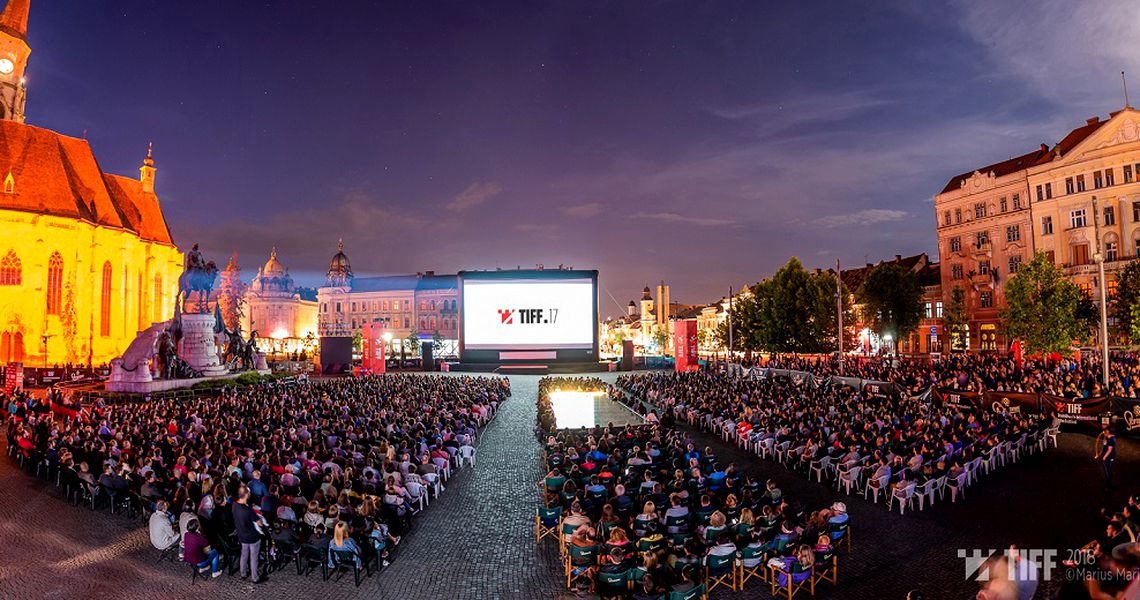 The Transilvania International Film Festival (TIFF) is the place where new box office records are made, sold-out opening and closing screenings are the talk of the town and eclectic film-based events are the places to be. Haven’t checked in yet? Maybe now is the time, if your schedule is clear between May 31 and June 9. Here’s why.

Once upon a time in Transylvania…

It was 2002 and the first edition of TIFF was pronounced a roaring success: jury members were American film critic Ron Holloway, film producer Lewis Chesler, Icelandic director Hrafn Gunnlaugsson, actress Oana Pellea and director Constantin Vaeni, with the participation of the American actor Brandon Priestley, best known for TV series Beverly Hills, 90210. The event boasted 43 movies from 15 countries, and 11 in competition, with Cristia Mungiu’s Occident being the big winner – and not only as it was the only Romanian movie in the competition. The director had already presented it at the Cannes Film Festival earlier that year.

The final touch came late on. “It was two weeks before TIFF was due to start. We were the best trained festival organizers in the world. Everything was by the book: awesome film selection, zero grammar mistakes in the catalog, all projectors checked, clean carpet at the Republica cinema, impeccable press conference. We were proud and we were sure we could be the talk of the town. But one thing was missing. The Star. A name. Someone who would attract the attention of Cluj people and convince them that we were not playing about and that we were doing serious work,” Tudor Giurgiu, the president of TIFF, told www.sub25.ro, recalling the behind-the-screen stories of the film festival’s very first year.

Looking back on last year

TIFF gets bigger and better every year. Not only in terms of an incredible film selection, but also in terms of connecting different arts to the movie world, presenting them to the public, not to mention the international stars who discover Romania through their TIFF invitation.

In terms of numbers and audiences, the largest film event in Romania attracted over 135,000 participants, with 227 titles – 178 features and 49 shorts – which played on the largest screen in the country and the 13 partner spaces. Almost 95,000 tickets were sold, up 5.7 percent on the previous year.

Among the special events with the highest attendance, the recital of international opera star Angela Gheorghiu and the screening of Tosca stand out, followed by The Pleasure Garden ciné-concert accompanied by Notes & Ties.

TIFF 2018’s record holder in terms of sheer number of tickets is Wes Anderson’s most recent film Isle of Dogs, which sold no fewer than 3,647. So what’s next?

In Romania, turning 18 is a big thing. That’s why the anniversary is a milestone for the organizers, who have invited some Cluj-based 18-year-olds to join their communication campaign, which is expected to bring some exciting moments this year. One piece of breaking news is a partnership with Shanghai International Film Festival (SIFF), presenting an ample selection of Chinese cinema, developing a collaboration platform for film industries in both countries, and having big names from Chinese film among the special guests.

TIFF 2019 is preparing a Focus China section, which will include a broad selection of recent Chinese cinema, a showcase of the most important titles awarded in international festivals, a surprise silent film screening accompanied by a live score, a retrospective dedicated to a major Chinese director, as well as industry meetings for directors and producers from both Romania and China.

Moreover, further surprises will come on the TIFF stages during the Romanian-French season which is currently taking place, as part of a cycle of cultural manifestations and knowledge exchange between the two countries. Composer and pianist Jean-Michel Bernard, awarded at Cannes in 2007, and the legendary group Les Négresses Vertes will perform in Romania for the first time.

Lights, camera, action: on the silver screen in 2019

Two of the directors previously awarded at TIFF will return with their most recent works: Spanish filmmaker Rodrigo Sorogoyen, whose Stockholm won the 2014 Transilvania Trophy, will bring The Realm (San Sebastian, Toronto), an absorbing political thriller about corruption at all levels of pow-er that could easily have been inspired by events in Romania.

Then Uruguayan Federico Veiroj, winner of the Special Jury Prize at TIFF for his 2011 La vida util, presents Belmonte (San Sebastian, Toronto), a moving portrait of a freshly divorced painter seeking a balance between his successful career and his personal dependency on his 10-year-old daughter.

A different look at painting is provided by My Masterpiece, a new black comedy by Gaston Duprat, whose The Distinguished Citizen was shown last year at TIFF. Accused by his gallery owner of failing to promote his own work, painter Renzo Nervi vandalizes one of his paintings by shooting bullets into it. The intended act of self-vandalism is embraced as performance art, triggering a delicious farce about the business of art.

A decade after winning an Oscar for The Lives of Others, Florian Henckel von Donnersmarck returns to the fray with Never Look Away, which was presented in competition in Venice and has been freshly nominated for best foreign language film at the Golden Globes. Inspired by the life of Gerhard Richter, the director cuts across four decades of German history, from the Nazi regime to the Communist one in East Berlin, in an engrossing epic about the phantoms of the Holocaust and art in a totalitarian regime.

Rojo, Benjamin Naishtat’s third feature, is a tragicomedy set in a small Argentinean town. A banal evening in a bar where a lawyer is verbally attacked by a stranger becomes a complex story filled with secrets, silence, and crimes. The San Sebastian festival jury awarded no fewer than three prizes to this film: for direction, acting, and cinematography. Another San Sebastian selection arriving at TIFF is Quien te Cantara, a work that confirms the status of Carlos Vermut (Magical Girl) as rightful successor of Pedro Almodovar. This dark melodrama, reminiscent of Ingmar Bergman’s Persona, centers on a star of the ‘90s preparing for her comeback after a decade of absence.

As the other films of Matias Bize (The Life of Fish, The Memory of Water) were presented in previous years at TIFF, 7:20 Once a Week could not be an exception. A chance meeting forces Manuel and Julia to reconsider their marriages and yearn for more as a one-night stand develops into something else.

Olivier Assayas’s Parisian comedy Doubles Vies also deals with double lives. Unexpected references to Star Wars, Taylor Swift, and Theodor Adorno are brilliantly woven into the story of a successful editor who has to adapt to the digital era, in which books no longer physically exist, couples are a flexible concept, and life seems to reorganize itself around social media with each new day.

British director Peter Strickland returned this year to major festivals (Toronto, San Sebastian) with the stylized horror In Fabric, which gives new cinematic meaning to the term “a dress to die for.” An ode to the transformative powers of fashion and a scathing critique of consumerism, the film brings back to TIFF a Strickland regular, the Cluj-born actress Fatma Mohamed.

And we saved the best for last. Business Review is a media partner of TIFF!