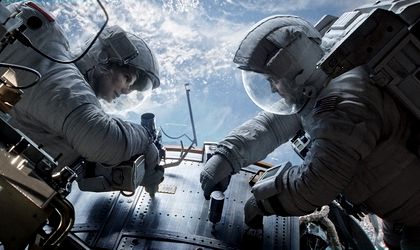 In space no one can hear you scream. Not so in Gravity, the stunning new drama from Alfonso Cuaron. In the Mexican director’s cosmos, not only can the viewer hear the characters scream, but we can hear every labored breath, as the movie juxtaposes the vastness of the universe with the vulnerability of human beings.

The human beings in question are Sandra Bullock and George Clooney. No other actor appears physically (though Apollo 13 actor Ed Harris voices Mission Control in a nice filmic allusion), making Gravity effectively a two-hander. Cuaron’s casting is astute: Bullock and Clooney are widely considered to be among the most likeable actors in Hollywood, and being in their sole company for an hour and a half never grates or bores. (Indeed, the Ocean’s Eleven charmer must rank pretty high on the list of famous people one might choose be stuck alone on a space station with…)

Clooney plays veteran astronaut Matt Kowalski – actually he just plays George Clooney (as he always does) wearing a space suit. He’s up at the Hubble Space Telescope on one last job before retiring. (When will these would-be pensioners learn? Last jobs before retiring must be the most dangerous thing in movieland aside from showing another character a photo of your picturesque wife and child back home just before you go to war. Or being married to Harrison Ford.)

Bullock is newbie Dr. Ryan Stone, a bio-medical engineer on her first mission after the sudden death of her child drove her to reevaluate her life. Both actors are playing familiar versions of themselves, and the slow, controlled opening sees them exchange easy banter while performing routine tasks on the telescope – or as routine as it gets when you’re 350 miles above the surface of the earth.

The chitchat is beside the point. All your focus will be on the extraordinary CGI images of the earth and space unfolding against the overwhelming silence of the cosmos, punctuated by Kowalski’s lengthy stories, tinny music and some back and forth with Houston.

Of course, Houston is soon telling them they have a problem. The pesky Russians have mistakenly attacked one of their own satellites, sending space debris soaring around the galaxy – the 3D is used here to striking effect – and the Hubble is hit. From what looked like a leisurely IMAX documentary, Gravity then segues into a more conventional duo-in-peril thriller, one which probes bigger philosophical themes related to the arbitrariness of life and death, human resilience and the survival instinct.

This is Bullock’s movie. Given the majority of solo screen time, she knots together a mature performance from elements of the ditzes, geeks and bruised tough cookies she normally plays to give us a believable hero we can root for. She’s not the obvious choice for the role, but her performance shows she has come a long way from trying to keep a bus above 50 miles an hour.

Gravity has its predictabilities and implausibilities. But they do not mar the overall effect of this powerful and remarkable film.