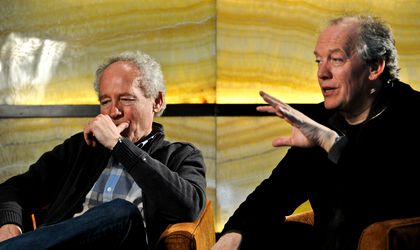 Jean-Pierre and Luc Dardenne, the Belgian filmmaking brothers, were in Bucharest last week to promote their latest film, The Kid with a Bike (Le Gamin au Vélo). In between the press screening and official premiere of the movie, they sat down with BR to discuss their work.

Directing duo Jean-Pierre and Luc Dardenne used their appearance in Bucharest, organized by the Wallonia-Brussels Delegation to mark a decade of activity in Romania, to call on the government to support the local film industry, as filmmaking talent alone is not enough to ensure success. “A country’s cinema is built through the state’s cultural policy. I would like the Romanian state to do something for Romanian cinema,” Luc Dardenne told a press conference.

The brothers, who also write and produce their films, spoke highly of the efforts of local filmmakers. They were on the Cannes jury that awarded Corneliu Porumboiu the Camera d’Or prize in 2006 for the film 12:08 East of Bucharest (A fost sau n-a fost). And their production house, Les Films Du Fleuve, co-produced Cristian Mungiu’s latest feature.

“I watched, of course, closely the films of Mungiu, Porumboiu and [Cristi] Puiu – three directors whose works we know – and I must say that for us it was a revelation. From my point of view, 432 is one of the greatest films in cinema history,” said Luc.

The naturalistic, pared down style of cinematography that characterizes Romanian New Wave seems a good fit for the brothers, who started out making documentaries in the late 1970s, before moving into feature films. “We do recognize our type of movies in Mungiu’s movies; there is a familiarity. Mungiu and Porumboiu both have a special style,” Jean-Pierre told BR.

Usually focusing on Belgium’s lower-classes and outsiders, the duo’s films have enjoyed repeated success at Cannes. When they scooped their second Palme d’Or in 2005 for The Child (L’Enfant) – they won their first in 1999 for Rosetta – they equaled a feat that only a handful of directors had previously managed, one being Francis Ford Coppola.

The Dardennes’ latest work, The Kid with a Bike, tells the story of Cyril, a young boy abandoned by his father who is taken in by a kindly local hairdresser. But the effects of his upbringing have left their mark on Cyril and he comes under the influence of a local gang. A full review will appear a forthcoming edition of Business Review.

In conversation with BR, the brothers explained their choice of protagonists, saying that it was not a conscious decision, but that “these are the people we wish to film. We like these kinds of people, to tell their stories and how they make ends meet, to show that they are able to do more than fight.”

The filmmakers said that while they hoped their movies would make viewers see the world differently and ponder upon what they saw, and that they ultimately hoped that their pictures might change things, they did not see the social and aesthetic as separate elements, but intermingling.

While some critics have drawn parallels between The Kid with a Bike and the 1948 Italian neorealist film Bicycle Thieves, among others, Jean-Pierre told BR that these were not deliberate. “For me there is no reference to these movies. The topic and story are different. We thought of Cyril and how we could save him. I do agree that when critics see it they’ll make such connections. But we don’t work like this.”

The Kid with a Bike is now on general release.