Ceausescu goes under the spotlight 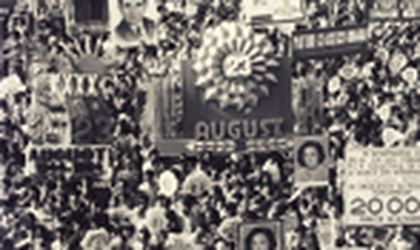 “It will be a very interesting, exciting exhibition on the Ceausescu period. Not accidentally, the opening [was] on January 26 which is the birthday of the ‘beloved' dictator,” said the minister of culture, Adrian Iorgulescu. “Extremely funny stuff from that period will be exhibited, the youngsters will laugh a lot when they see what the big tyrant was receiving, but they'll also have the opportunity to see what survival in the socialist era meant.”
The exhibition is entitled ‘The Golden Epoch: between propaganda and reality' and has two themes: “the personality cult and the breakage of the collective memory, of the historical past, in the attempt to mystify the past,” said Radu Coroama, MNIR's director.
The exhibition includes gifts received by Ceausescu, audio and video tapes with some of his speeches, works of art, photos and also small reconstructions of home interiors in the communist period among other exhibits. It will run until March 1.
The opening was attended by dissidents mentioned by the Tismaneanu Report. The event was organized by the Ministry of Culture, MNIR and the Civic Media Association.