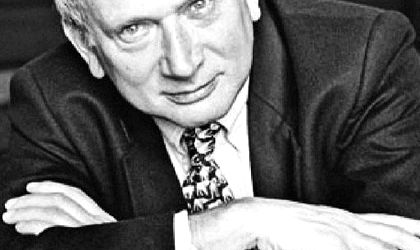 On January 25, British writer Paul Bailey is meeting his readers for a public lecture of “The Prince’s Boy,” the book inspired by the destiny of some historical Romanian characters. A few years ago, the author declared that “Romania changed the course of my life as a writer”. Romanian critic and writer Marius Chivu will be present at the event.

Writer and broadcaster Paul Bailey was appointed Literary Fellow at Newcastle and Durham Universities (1972-1974), and was awarded a Bicentennial Fellowship in 1976, enabling him to travel to the USA, where he was Visiting Lecturer in English Literature at the North Dakota State University (1977-1979). He was awarded the E. M. Forster Award in 1974 and in 1978 he won the George Orwell Prize for his essay “The Limitations of Despair”, first published in The Listener magazine.

Paul Bailey’s novels include “At The Jerusalem” (1967), which is set in an old people’s home, and which won a Somerset Maugham Award and an Arts Council Writers’ Award; “Peter Smart’s Confessions” (1977) and “Gabriel’s Lament” (1986), both short-listed for the Booker Prize for Fiction; and “Sugar Cane” (1993), a sequel to “Gabriel’s Lament”. “Kitty and Virgil” (1998) is the story of the relationship between an Englishwoman and an exiled Romanian poet. In his last novel, “Uncle Rudolf” (2002), the narrator looks back on his colorful life and his rescue as a young boy from a likely death in fascist Romania, by his uncle, a gifted lyric tenor and the novel’s eponymous hero.