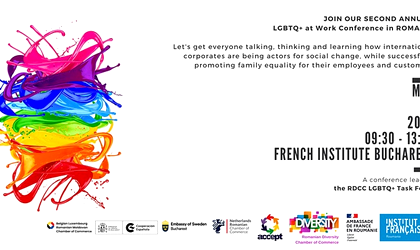 Romania is facing an exodus of young, talented and educated people, who are leaving to countries with more open and tolerant societies. In addition, people who work in open, diverse and inclusive environments tend to perform better. Thus, there is a close link between innovation and the rights of LGBTQ + people, and companies that promote diversity and inclusion perform better in terms of innovation than their competitors, according to the latest study “Economic Arguments for Including LGBT+ People in Central and Eastern Europe ”. In addition, unequal access to health services, as well as discrimination against LGBTQ+ people at work, contribute to lower productivity, which in turn generates loses in the Romanian economy.

The Romanian Diversity Chamber of Commerce is proud to host the second LGBTQ+ at Work conference in Romania, with Business Review as the Exclusive English Media Partner. The event, which will be in-person and is organized in partnership with the French Institute and the French Embassy in Romania, and ACCEPT, aims to promote social change in the local and regional business environments, while shining a light on current issues faced by the LGBTQ+ community in the workplace.

“We live in times where people want to be able to bring their whole self to work. Companies will need to accommodate that, or risk losing talent over old, bigoted ways to doing things. At this point, it’s costly to not be inclusive. We want to work with companies to support them in welcoming diversity with open arms. According to The Economic Case for LGBT+ Inclusion in Central and Eastern Europe, launched in 2021, every year, LGBTQ+ discrimination costs Romania between $1.6 billion and $4.4 billion, or the equivalent of 0.63% to 1.75% of the country’s GDP. Let’s bring that money back into the economy,” Lestat Monroe, RDCC Founder, said. 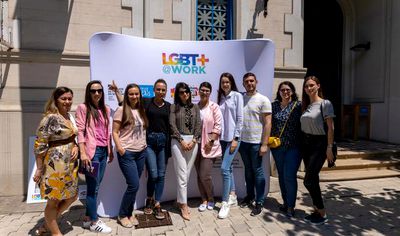 The costs of discriminating against LGBTQ+ people are largely due to unequal access to health services and discrimination in the workplace, which contributes to lower employee productivity.

The conference will take place on May 17th, at the French Institute (Elvira Popescu Cinema, bd. Dacia 77, Bucharest) and will include speakers from entities such as the French Institute, ACCEPT, the RDCC, Dentons Romania, IKEA, Accenture, as well as the content creator & social activist Aluziva. The conference is supported by the Netherlands-Romania Chamber of Commerce, the Belgian-Luxembourg-Romanian-Moldovan Chamber of Commerce and the Embassy of Sweden in Romania as Strategic Partners. Click HERE to attend and register to the conference.

The event will feature success stories and LGBTQ+ inclusion policies promoted by private companies in Romania, to highlight the performance of businesses that embrace diversity to attract talent and increase productivity, and to generate social change.

Almost a quarter of LGBTQ + people in Romania have been discriminated against at work in the last year.

The study also presents information that places Romania at the bottom of the rankings in Europe in terms of the protection of these people, showing that the country ranks 39th out of 49 in terms of LGBTQ+ rights and that discrimination at work and aggression are a reality for many people in Romania. Thus, 23% felt discriminated at work in the last 12 months, 15% have suffered physical assaults and sexual abuse in the last 15 years and 44% have been harassed in the last year.

International Day of Disabled Persons: 38 landmarks around Romania will be ‘bathed’ in...