When the other Romanian capital hosts film festival 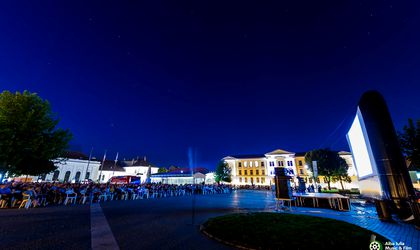 Besides the outstanding Alba Carolina citadel, which was recently face lifted and looks pretty incredible, there is not much to be said about Alba Iulia in cultural terms. At least this was my opinion regarding the cultural agenda of this city. On the other hand, a news that popped-up last year was widely presented this year: Alba Iulia could become the first Romanian smart-city. The development of Alba Iulia under the smart city principles could yield total benefits of EUR 532 million over the course of 35 years, according to a new study by German engineering group Siemens, notes one of my colleagues in an article published on July 2017.

“At this moment, there are close to 300 smart lighting systems. It’s an exercise to see that we can do things differently, and of course things will move forward,” said the mayor of Alba Iulia, Mircea Hava, cited in the article mentioned above. On the same subject, George Costache, CEO of Siemens Romania, explained that the digitalization will certainly change the urban infrastructure. Furthermore, Costache said the citizen has to be a partner under the smart cities principles. He added that the massive amounts of data generated by smart cities need to get to the citizens as information that they need.

Thus being said, are citizens willing to be actively involved in their city development?

To be honest, the reason I accepted the invitation to Alba Iulia Film Festival was the curiosity. I wanted to see if the city’s inhabitants want to be part of whatever cultural event is settled in the citadel especially for them. This curiosity of mine arose since last December, when I went to Alba Iulia to celebrate our National Day. There, tourists were everywhere and the citadel was literally under attack due to some smoke provided by the sponsor which organized the biggest traditional Romanian meal (disputable, of course), the beans with pork menu (in Romanian, fasole cu ciolan).

Back to Alba Iulia Film Festival. I arrived in the first day, very late at night, due to some traffic jam. We landed directly to the party organized in the citadel’s garden, where some people were dancing in the grass, making fun of them because they were playing with their shadows. Amazing vibe, amazing people. And some amazing dancing.

Later on, I saw some pictures from the official opening of the festival, and the citadel’s square was full, while the enthusiasm of the festival-goers was also captured – they had some artistic representation of Compagnie des Quidams. I do love these artists, I saw them several times at TIFF and FITS, and every time they gave me these good vibes of magic. For sure, this kind of magic happened also in Alba Iulia.

On the next day, the program was pretty good – some Romanian jazz (saxophonist Matei Crețiu Codreanu), some international jazz (Serbian band EYOT), a cine-concerto held by Diallele presenting The man who never laughed and a great selection of films – Radu Mihaileanu’s The history of love, Dalida and the interactive screening Maribor Uprising. Despite the weather and the almost-rainy evening (dear readers, do take into consideration that all these screenings were outside), there was public – from kids to elders, from couples to high-school gangs. And they enjoyed the performances. Furthermore, Staropramen once again presented FOOD FILM, the story of the Argentinian barbecue, offering also some specially-designed menus to enjoy with their beers. Thumbs up for Staropramen.

Long story short, I was impressed. Firstly, by the amount of banners and posters mentioning the festival in the city’s main neighbourhoods. Secondly, by the team of young volunteers who were part of the festival. Third, by the various public who attended the festival. Although it wasn’t a sold-out event, those present there seemed to really enjoyed what was staged. And from my point of view, this is a big plus. The art cinema isn’t for everyone and the Romanian movies aren’t as commercial as you may think.

And chapeau, once again, Staropramen for the barbecue and Mobila Dalin for the interactive cinema room which was opened on Sunday, but I already left the citadel.