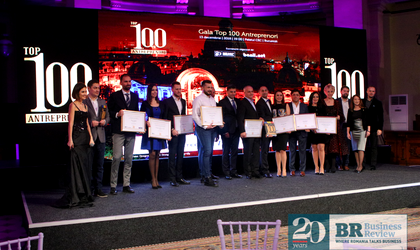 Diversity, innovation and enthusiasm are the most common ingredients of the Romanian start-ups analysed by the Business Review team. There are many businesses that impressed us mainly because of the entrepreneurial behaviour of their founders and of their vision and strategy which are completely different from what the Romanian economy has given so far. Business Review team chose ten young
entrepreneurs who have businesses with huge potential of becoming iconic for the national economy.

Lucian Cramba (31) is a young entrepreneur who created an application which in less than five months registered 30,000 users. BeeZ is a platform that revolutionizes the way in which consumers can make savings. It combines the online retail with the fin-tech principles. The application allows users to save money when shopping throughout hundreds of partnerships with retailers in Romania. The idea was so
popular among local users so that in just few weeks since its launch, it outperformed Amazon and Google Play in terms of trending shopping in Romania. Business Review met with a part of the BeeZ team at WebSummit in Lisbon, the biggest technology fair in Europe. There, the Romanian start-up showed its product in front of hundreds of thousands of people around the globe. Six months ago, Andrei Grigorean and Mihai Ciucu were teaching Olympic students at Informatics while developing a recruitment platform for the IT professionals. After they attended to an international conference about block chain, they understood its limitations and decided to find a more effective alternative to it. Their product can process 20,000 transactions per second while block chain can process between two and three transactions per second. After the first round of presentations and meetings with potential investors from US, they managed to raise USD 5 million from some of the largest crypto investment funds. They started their business back in 2014, following an investment of EUR 80,000 with the aim of opening a coffee shop with a complete different concept compared with what could be seen at that time in Bucharest: from design to the quality of ingredients which came from the small local producers. Plus, smoking was not allowed inside the coffee shop, which was highly-risk approach for any player on the
hospitality market at that time. Today, they manage two coffee shops under the M60 brand, a summer garden, a pizzeria inspired by the Neapolitan tradition which is about to be launched this month and a fine dining restaurant, relocated in a historical building. The restaurant, which reinvents the Romanian traditional cuisine, was opened this year and it became the most appreciated fine dining in Bucharest by
TripAdvisor in just few months since its launch. As for the 2019, the entrepreneurs aim to open a new concept of coffee shop through which their employees can benefit each month of an experience sharing process with other European similar places. Cristina Sucu (27) comes from an entrepreneurial family and confirms the Romanian proverb which says that “the wood chip doesn’t bounce far from its tree.” Together with his husband, Vlad Alexandru, they invested EUR 700,000 in the largest indoor playground in Bucharest, called Kiddo Play Academy. Inspired by the experience that playgrounds from Dubai or US offer, their concept became highly popular quite
soon and generated a RON 500,000 net profit for its owners in 2017. “This concept is called “educational entertainment”;. All the activities that take place in such a playground are thought so that the children could learn by playing. We have made an ongoing research for one year after this idea had come to us. I think that we saw over 50 such locations from all the continents,” recalls Cristina. The two entrepreneurs opened an additional location in ParkLake, the largest mall in Bucharest and they intend to continue their expansion in Bucharest, a move that will depend mainly on finding the right place. Vegis.ro, the largest online retailer of organic products is a family business. Six years ago, Mihai Bucuroiu, the one who created initially the Libris.ro website, decided that together with his wife, Catalina, to invest in an online shop of bio products. From an initial investment of EUR 5,000, Vegis.ro became a market leader and generates annual business of about EUR 2 million. Mihai told Business Review in an interview that it took three months since they decided to invest in such a business to launch their website. Vegis.ro posted profit in its first year of existence and 30 percent of their products come from local producers. Recently, the company completed an EUR 600,000 investment in a
storehouse, near Brasov.

Find out who the last five are in the print edition of Top 100 Entrepreneurs, which you can order by contacting events@business-review.eu

Businesses Ideas for the Aspiring Entrepreneur